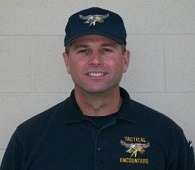 Dan Danaher is a retired sergeant with 28 years of law enforcement experience. He has been retained by his former agency as the range master to oversee the firearms and TASER programs. Dan is also the co-founder of Tactical Encounters Inc., a law enforcement training company based out of Michigan.

Dan is a former Marine Non-Commissioned Officer, where he served as a rifleman, scout/sniper and marksmanship instructor. Dan also served in the Persian Gulf, during the Iran/Iraq War on the USS Okinawa and Mobile Sea Base Hercules in support of Operations Earnest Will and Prime Chance.

Prior assignments/duties include patrol supervisor, special operations unit, motor officer, range-master, and narcotics and surveillance bureau. Dan was also the former senior team leader for the Western Wayne Special Operations Team with over 18 years of SWAT experience as both a sniper and entry team leader. He is the former operations officer of the Western Wayne County Mobile Field Force Team and was a member of his department’s Color/Honor Guard for over 25 years.