A weekend of firearms instruction by John Hearne cannot be missed

Defensive tactics training: Enhancing front compliance for a person who is ‘feeling no pain’

Informing your community about law enforcement policy: Key components of a communication strategy

Training day: How to set up a community outreach event to review police policy

Q&A: Not your average citizen’s academy

Why PDs must open their doors to build community trust

Building secure and reliable mission-critical systems in the cloud

While it may not be required, having post-secondary education under your belt as a police officer will net you a higher salary and make it easier for you to move up in the ranks.

Dallas PD automatically gives officers with a bachelor’s degree an additional $300 per month, and also offers a bonus pay of $110 to $150 per month for knowing specific foreign languages. Depending on your level of proficiency, a Texas Commission on Law Enforcement (TCOLE) certification can net you an additional $200 to $500 per month. In total, recruits with additional schooling can earn $5000 to $8000 more per year.

In the LAPD, an officer with the rank of Police Officer II with a college degree (AA or higher) will earn $2631 more per year than an officer of the same rank without a degree or military experience.

Police officers with degrees are easier to promote

According to a 2013 study published on the FBI’s website, only about 1 percent of all police departments required a college degree. However, almost half of all respondents reported that they had either taken classes or earned a bachelor’s degree while serving as an LEO. 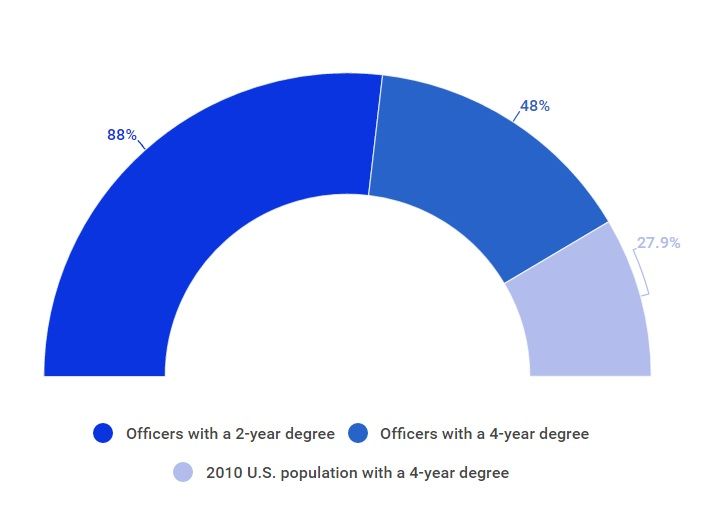 Surveyed police officers were educated at a higher rate than the average American (Source).

Officers who favor “street smarts” and experience over textbook knowledge will say that, regardless of studies, a university education alone doesn’t necessarily make officers more skilled or more competent at work. While that could be true, given two equally skilled and experienced officers, education may be the deciding factor that promotes one candidate over the other. Some police respondents in Minnesota even reported that a bachelor’s degree was necessary to be promoted to ranks of sergeant or higher.

Though your department may have only required a high school diploma or just a few credit hours’ worth of classes, finishing out a bachelor’s degree opens up the door for additional promotions. This is a natural transition into higher paying, less physically demanding work as you grow older.

New research suggests that possessing a bachelor’s degree may improve certain aspects of field performance, including using less verbal and physical force than officers of the same experience without a degree.

Police departments place a greater value on educated officers because of the changing nature of law enforcement. In the community policing model that’s gaining traction worldwide, police officers not only enforce the law but reach out to communities to organize events and find common solutions to local problems.

The ability to adapt to new developments and critically solve problems in the rapidly-changing police profession is a must for any candidate. Officers with degrees will bring a diverse skillset to their department, earn a higher salary, and make themselves more eligible to further their career through promotional opportunities.

LEOs weigh in: Should a bachelor's degree be the minimum education requirement for a cop?

Is a criminal justice degree worth it? The answer is yes.