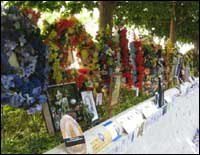 On the Police Heroes topic page we not only remember those who have made the ultimate sacrifice in the mission to protect their communities, but we also recognize the many moments of heroism that all too often go unnoticed by the public or the mainstream press.