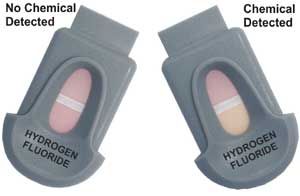 The new hydrogen fluoride (HF) sensor detects gases and vapors in the air where other technologies only detect hazards in liquid or aerosol forms. Gaseous forms of the toxic chemical are the most likely danger to fire fighters, first responders, police and homeland security professionals. All Chameleon® kits are designed for an easy on/easy off fit on the wearer’s forearm and can be worn over most turn-out gear or level-A suits.

Hydrogen fluoride and its variants are ranked as one of the most dangerous families of chemicals used in manufacturing facilities. Hydrogen fluoride is commonly used to make refrigerants, herbicides, pharmaceuticals, high-octane gasoline, aluminum, plastics, electrical components and fluorescent light bulbs. Over half of all production of hydrogen fluoride is used in the manufacturing of refrigerants. Hydrogen fluoride exists as a colorless gas or a fuming liquid, or it can be dissolved in water. When it is dissolved in water, it becomes hydrofluoric acid. Exposure to hydrofluoric acid can occur during an industrial accident or as a result of a natural disaster affecting manufacturing facilities and damaging storage containers of the chemical.

Hydrogen fluoride has a strong, irritating odor that is discernible at concentrations of 0.04 ppm. In the form of hydrofluoric acid, hydrogen fluoride is colorless and is indistinguishable visually in water. The gas can cause severe eye, mucous membrane and skin irritations. In large concentrations, hydrogen fluoride aggressively penetrates tissues and results in cell destruction such as skin burns, corneal clouding and destruction, multi-organ failure, respiratory paralysis, cardiac failure and even death.

The new hydrogen fluoride sensor developed by Morphix Technologies will be part of the easy-to-use, low-cost Chameleon® Hazmat Detection Kit to be used alone or in addition to hazardous chemical protective suits and masks to identify dangerous levels of hydrogen fluoride and other toxic chemicals in industrial accidents.

The hydrogen fluoride sensor will change color when the toxic gas is present and requires no power source or calibration.

Unlike current colorimetric detection systems, the Chameleon® is designed to military standards for use in a wide variety of operating environments. It can be used in desert heat, arctic cold or tropical conditions and can even be immersed in water.

For more information on any of the Chameleon® Detection Kits visit www.morphtec.com. Friend us on Facebook.

About Morphix Technologies®
Morphix Technologies®, located in Virginia Beach, Virginia, is an ISO 9001:2008 certified company developing and manufacturing products that detect invisible dangers in order to save lives. Morphix Technologies has taken innovation to the next level with high-quality, easy-to-use, cost effective simple colorimetric sensor technology for military, first responders, emergency, homeland security and industrial personnel. The latest product, the Chameleon®, a wearable device that allows hands-free detection of up to ten different hazards at one time in a variety of operating environments, has provided their customers whose job is often in Harm’s Way, a lifesaving, early response system like no other on the market today. Visit www.morphtec.com