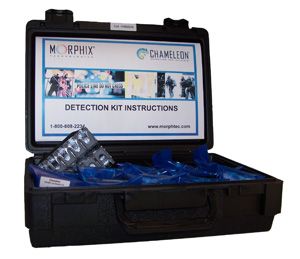 VIRGINIA BEACH, VA –Chemical suicides have doubled in the first half of 2011 in the United States over figures from 2010. A total of 72 deaths have already been confirmed in the US with 27 having occurred in 2011. Chemical suicides are the result of mixing common household chemicals resulting in a toxic gas, most notably hydrogen sulfide. Combined in a confined area, the victim quickly asphyxiates. Unfortunately, for many first responders, and despite warnings posted by the victims, over 80% of police and first responders have been injured when responding to chemical suicide situations.

Morphix Technologies®, an innovator in the science of colorimetric detection devices for dangerous chemical gases, is on the forefront of preventing accidental exposure to first responders from these toxic chemicals. The Chameleon® Chemical Suicide Detection Kit offers police, EMS and first responders a field-configurable, low-cost, easy-to-use, hands-free solution when encountering a chemical suicide.

The most notable gas produced in chemical suicides is hydrogen sulfide. In low concentrations hydrogen sulfide produces the common “rotten egg” smell, but in higher concentrations the chemical first affects the sense of smell by paralyzing the olfactory nerves, thus the victim no longer smells anything and neither will first response teams. Death results from pulmonary edema and/or respiratory failure. Concentrations can be so high as to incite death in just one breath. Most victims have chosen an automobile as the location for the suicide act and by taping the surrounding gaps in the doors and vents and posting warning signs, think that toxic chemicals are well contained. But often times the chemicals vent outside the suicide area and without a reliable and easy-to-read chemical detection system, many first responders require medical attention and even long-term care after exposure. 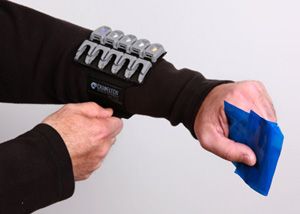 The use of Chameleon® Detection Kits by police, fire and first responders on service calls and as a part of their training program can provide an extra measure of safety and perhaps even save lives.  In addition to safety considerations, the use of the Chameleon® can reduce liability, injury, time off and result in a reduction of costs by possibly preventing injuries.

The Chameleon® is designed for an easy on/easy off fit on the wearer’s forearm and can be worn over most turn-out gear or level-A suits.  The sensors change color when toxic gases are present and require no power source or calibration. Unlike current colorimetric detection systems, the Chameleon® is designed to military standards for use in a wide variety of operating environments. It can be used in desert heat, arctic cold or tropical conditions and can even be immersed in water. The Chameleon® detects gases and vapors in the air where other technologies only detect hazards in liquid or aerosol forms. Gaseous forms of toxic chemicals are the most likely danger to first responders, police and fire personnel.

About Morphix Technologies:
Morphix Technologies®, located in Virginia Beach, Virginia, is an ISO 9001:2008 certified company developing and manufacturing products that detect invisible dangers in order to save lives. Morphix Technologies has taken innovation to the next level with high-quality, easy-to-use, cost effective simple colorimetric sensor technology for military, first responders, emergency, homeland security and industrial personnel. The latest product, the Chameleon®, a wearable device that allows hands-free detection of up to ten different hazards at one time in a variety of operating environments, has provided their customers whose job is often in Harm’s Way, a life saving, early response system like no other on the market today. www.morphtec.com.