Reston, VA. — Parabon NanoLabs (Parabon) announced today the general availability of its Snapshot Genetic Genealogy Service, which provides investigators a revolutionary new tool for solving crimes with evidence from an unknown DNA sample. The company’s new genetic genealogy (GG) unit is led by CeCe Moore, a pioneer in the field, best known for her work on the PBS television series Finding Your Roots. Parabon’s GG analysts compare crime scene DNA samples against public genetic genealogy databases to narrow down a suspect list to a region, a family, or even an individual. The approach is the same as that used by law enforcement to identify the Golden State Killer suspect Joseph James DeAngelo. 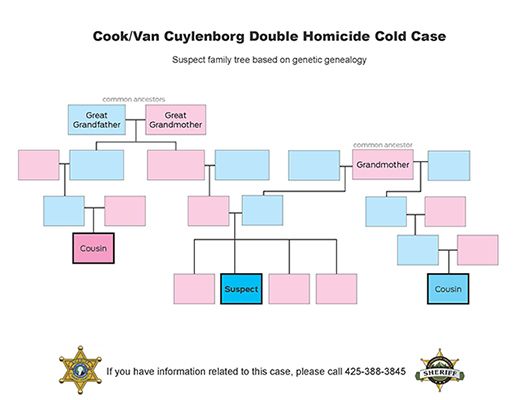 The company has been piloting the service and has already screened samples for nearly 100 agencies. Parabon’s CEO, Dr. Steven Armentrout, says the results so far have exceeded all expectations. “Of the cases we have screened, 20% look to be directly solvable with GG methods alone and another 30% are likely solvable in partnership with law enforcement.” He continued, “In the past week alone, while working two unrelated homicide investigations, each unsolved for over 30 years, we were able to provide investigators with the likely name of the perpetrator. For detectives, this is an absolute game changer.”

When GG methods alone are not sufficient to solve a case, Parabon can apply other tools to help generate workable leads. The company’s Snapshot DNA Phenotyping service, which has revolutionized forensic DNA analysis in recent years, can be applied quickly and easily following GG analysis, with no additional lab work. For example, in a recent Jane Doe investigation, GG methods alone were only able to identify the region where the victim’s family originated and surnames that likely appear in her family tree. Creating a Snapshot composite of the victim has allowed investigators to talk with families in the area with the goal of finding a missing woman who meets the description. In other cases, the Snapshot Kinship Inference service, which accurately predicts the relationship between two DNA samples, is helping investigators include or exclude branches of large family trees by testing cooperative family members.

Dr. Ellen McRae Greytak, head of the Snapshot division, says the GG service is a natural extension to the company’s string of innovations in the DNA forensics field, which have been making a measurable difference for investigators. “We constantly strive to improve all aspects of our analysis, from the protocols used to extract high-quality genotype data from challenging forensic DNA samples, to the algorithms for predicting phenotypes and matching against distantly related samples. GG analysis offers an entirely new avenue to generating substantial investigative leads. In the coming months, we anticipate a large number of arrests in which Snapshot GG analysis was helpful, even critical to the investigation. Stay tuned for those announcements.”

About Parabon NanoLabs, Inc.:
Parabon NanoLabs is a vertically integrated DNA technology company that develops next-generation forensic and therapeutic products, which leverage the enormous power of DNA. Staffed by a uniquely qualified team of scientists and technologists, with expertise ranging from bioinformatics and chemistry to computer science and pharmacology, Parabon is bringing to market revolutionary new products and services made possible by recent advances in DNA sequencing, analysis and manufacturing technologies.