Alert-360: Safeguarding Personal and Public Safety in a “Wired” World

The widespread use of mobile technology has resulted in a dramatic increase in the number of
emergency telephone calls generated from these devices since their introduction to the consumer market
in the early 1990’s. Today, approximately 70% of all 9-1-1 calls today are generated from mobile phones, and this number is increasing every year. Estimates put the number of mobile telephone users in the United States at over 320 million and 6.8 billion users worldwide.

While mobile telephones oﬀer unique advantages during emergencies, their use often presents inherent challenges to public safety and medical first responders, primarily associated with determining the user’s location, identity, and the nature of the emergency.

Since the introduction of the United States’ 9-1-1 emergency telephone system in 1968, advancements in technology have largely involved improvements in call routing and the eﬃciency of computer aided
dispatch (CAD) systems. Some two decades have passed since the introduction of mobile phones and only small improvements have been made to leverage the potential benefits of mobile technology networks.

We Live in a World Reliant on Mobile Technology

The potential for harnessing today’s technology to enable community members to “co-produce” public safety is immense. A “wired” community can be mobilized quickly to serve as reporters and
witnesses---and in limited cases, actual responders---in a range of public safety incidents.

As one blogger recently observed upon reviewing the book Linked, “You can't look anywhere without seeing networks.”  The challenge is to capitalize on them to co-produce a public good---an enhanced response to serious public safety incidents.

Electronic devices, especially cell phones, are now more  ubiquitous than Coca Cola and can be linked instantaneously by Alert-360®  to form a real-time reporting and response network in any serious incident.  A check of the local Starbucks will quickly reveal a latent virtual electronic network (e.g., customers on cell phones and other devices) that can be linked by a simple app.  Similar latent electronic networks are widespread in other public settings, including a city’s central business district, schools, transit vehicles, shopping malls and entertainment venues.

Mobile technology has revolutionized our social, economic and political worlds.  Slowly, but surely the largely private benefits---convenience, customized functionality, near real-time connectedness and transactional ease---are beginning to spread---in an uneven and  piecemeal fashion--- into the public sector, where applications are being developed to safeguard both personal and public safety.  The focus of such applications is the wide range of personal and public safety emergencies that occur regularly, as well as large-scale incidents like the Boston Marathon bombing.

During an a typical emergency situation where 9-1-1- is called today, the caller and the public safety dispatcher answering the call, are likely the only two persons aware the emergency for a significant period of time. Time is required to route and connect the call, communicate incident details, and ultimately dispatch first responders to the scene. In many instances, it can take up to ten minutes for emergency services personnel to arrive. Meanwhile, people in close proximity often remain unaware that an emergency has occurred or is occurring nearby.

During medical emergencies, minutes, even seconds can often play a critical role in patient survivability. Studies have shown that the many heart attack victims have a six-minute window within which CPR or defibrillation must be administered. In communities with Alert-360®, help may be just around the corner.

“You can't look anywhere without seeing networks.” The challenge is to capitalize on them to co-produce a public good---an enhanced response to public safety incidents.

In seconds, your agency can quickly determine the size of an Alert-360®  incident network that was created in proximity  to any emergency. Powerful, standard features include:

•    The ability to instantly message all users who were alerted in proximity to the incident.

•    The ability to instantly message select users who where alerted in proximity to the incident.

•    The ability to receive information to include photos, video, and audio files submitted by alerted users.

The Alert-360®  Alert Management PlatformTM  is extremely intuitive and easy to use. A notification queue provides the ability to quickly determine any received incidents with submitted information. 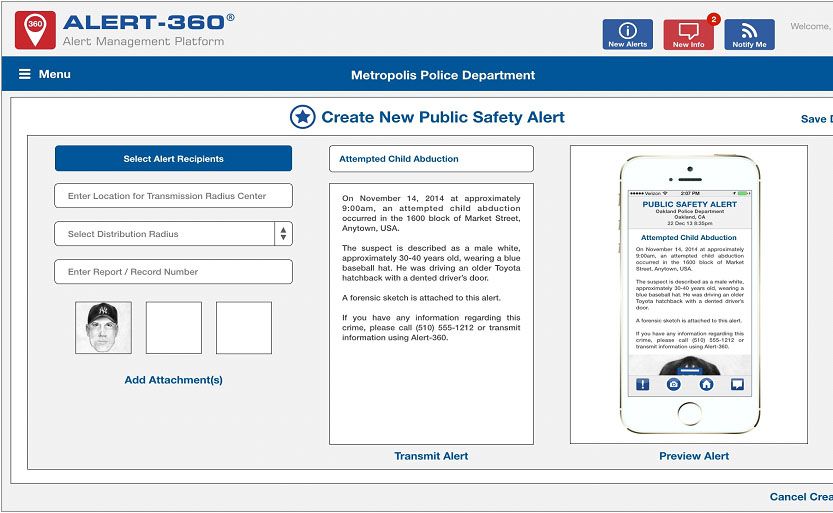 Alert-360®  users are notified in seconds of an emergency occurring nearby. Real-time situational awareness enables users, who otherwise may be unaware of an unfolding emergency, the ability to pay close attention to their surroundings and potentially provide witness information that would otherwise have gone unnoticed.

Additionally, Alert-360®  can provide critical situational awareness during emergencies such as active shooting incidents that can mitigate traumatic injuries and potentially limit the loss of life. For example, regarding active shootings, the most compelling finding from years of research is that minimizing the time between the detection of
a threat and the initiation of protective measures, the activation of public safety responders and engagement of the threat is the prime determinant of lives saved or lost.

The Alert-360®  Alert Management PlatformTM (AMP) also enables agencies to quickly generate and transmit public safety alerts within their
community. Alerts can be sent to targeted geographic areas such as neighborhoods, or to an entire city, county, or state, depending on an agency’s jurisdictional boundaries.

Additionally, Alert-360®  can be specially configured within your community to crowd-source other emergency alerts such as robbery alarms, Amber Alerts, detected gunfire, and burglary alarms (within configured neighborhood groups).

The Alert-360®  Alert Management PlatformTM  (AMP) enables public safety agencies to quickly generate and transmit customized public safety alerts to their community. Public safety alerts can be sent to targeted geographic areas such as neighborhoods, or to an entire city, county or state depending on an agency’s jurisdictional boundaries.

•   The ability to create custom alerts and attach multiple images and other media file types.

•   The ability to transmit alerts to targeted geographic areas or to your agency’s entire jurisdiction.

•   Alert-360®  users in your community can submit information linked to agency generated alerts.

•   The ability to easily determine the number users who will receive an alert prior to transmission.

Additionally, the  Alert-360®  Alert Management PlatformTM  allows organizations to generate and transmit private, agency-based alerts to designated user groups within or outside their organization.

Evelyn S. is has just opened her neighborhood store for the day when a man enters the store and immediately approaches the counter. He quickly produces a handgun and demands that Evelyn open both the cash register and safe. Evelyn complies with the man giving him money from both the register and small safe under the counter. Unbeknownst to the robber, Evelyn’s daughter is out of view in a nearby storeroom and uses Alert-360®  to call 9-1-1, but does not speak, fearing that the robber will discover her presence.

Within seconds of Evelyn’s daughter using
Alert-360®  to make the  emergency call, Alert-360® simultaneously transmits an emergency safety alert to other nearby Alert-360®  users.

Jennifer W., who had just parked her car near Evelyn’s store and was getting ready to head inside, receives the safety alert and quickly notices that it was transmitted from inside the store. Instead of going inside the store as she had planned, Jennifer remains in her car, watching the front of the store for anything unusual.

Stephen K., who lives across the street from the store is watching television when he receives the Alert-360®  safety alert from the store on his mobile phone. He walks to his front window and looks outside at the store, also looking for any unusual activity. He is aware of robberies that have been occurring in the area after receiving a public safety alert earlier in the week generated from his local police department’s Alert-360®  Alert Management PlatformTM.

Approximately one minute later, the robber runs from the store across the street to a nearby car driven by another man. Jennifer W. observes the man carrying a bag and tucking a firearm into his waistband as he is exiting the store. She quickly uses Alert-360®  to call 9-1-1 to report what she is seeing to the police dispatcher. Stephen K. also sees the man running from the store and is able to take a picture of the car from his front window. He also calls 9-1-1 and quickly uploads the photo of the suspect vehicle to the police department’s Alert-360®  Alert Management PlatformTM. He is also able to obtain a partial license plate of the suspect vehicle as it speeds away from the scene. Because Alert-360®  was able to
quickly generate witnesses to the robbery, responding oﬃcers are able to apprehend the suspects as
their vehicle was about to enter the nearby freeway.

James M. has just finished dinner with friends at a local restaurant and is walking to his car when he notices a man who has collapsed in the parking lot. He approaches the man and immediately uses Alert-360®  to dial 9-1-1, noticing the man is not moving and appears to not be breathing. While waiting to be connected to the emergency dispatcher, Alert-360®  simultaneously transmits an emergency medical alert to other nearby Alert-360®  users.

Dr. Michael S. is inside the restaurant dining with several colleagues when he receives the Alert-360® medical alert on his mobile phone. He quickly glances at the map and notices that the alert was generated in the parking lot of the restaurant. He quickly excuses himself and
looks out of the front door to the restaurant and sees James M. on his cell phone standing next to the collapsed man.

Dr. Michael S. moves immediately to the
collapsed man and determines he is not breathing and does not have a pulse. He immediately
begins to perform CPR while James M. maintains communications with the emergency dispatcher.

Dr. Michael S. was able to provide CPR within one minute of receiving the Alert-360® medical alert and continues to provide emergency medical treatment until paramedics arrive approximately five minutes later. Without Alert-360®  would have been completely unaware of the medical emergency occurring only a short distance away from him outside the restaurant.

Real-time, hyper-local, situational awareness has tremendous potential to save lives, especially during medical emergencies when every minutes counts. Within seconds of an emergency medical call,
Alert-360® has the ability to summon medical assistance from an instant network of community-based users. Moreover, Alert-360® works anywhere in the world, without the need to subscribe to disparate networks or location-based subscriptions required by similar emergency mobile applications.