Know the risks and prepare your department for a cyberattack

Virginia Beach, Va. – StarChase LLC is a provider of GPS tracking and pursuit management technology to law enforcement worldwide. The company’s patented technology is proving its tactical capabilities with our Arizona Department of Public Safety (AZDPS) officers near the US border.

On May 16, while attempting a routine traffic stop of a vehicle on I-10, an AZDPS officer deployed a StarChase GPS tag onto a vehicle after it failed to stop for the police. The officer involved was able to successfully track the vehicle via GPS to a residence off of I-10 where a search of the vehicle uncovered 34 bundles of marijuana totaling 710 pound. The drugs and vehicle were seized.

Another incident occurred on May 26, when an officer with the Arizona Department of Public Safety (AZDPS) attempted to stop a vehicle on I-10. When the driver failed to yield and attempted to flee, the AZDPS officer deployed a StarChase GPS tag onto the vehicle. Officers seized 1,618 pounds of marijuana from the vehicle. The drugs and vehicle were seized and the suspects were arrested.

In both cases, the use of the StarChase pursuit management system eliminated the need for high-speed pursuits and allowed the officers to accurately locate the suspect vehicles.
“The StarChase system allows law enforcement officers to electronically follow vehicles and determine their exact location without engaging in dangerous high-speed pursuits,” said Major Larry Scarber, the Southern Highway Patrol Bureau commander. “This innovative technology provides an increased measure of safety for officers in the field and for other drivers on the road.”

The AZDPS was the first state-level agency to deploy StarChase. Since then, the agency has purchased and deployed additional units and they are providing valuable pursuit-related data to StarChase’s on-going cooperative agreement with the National Institute of Justice. 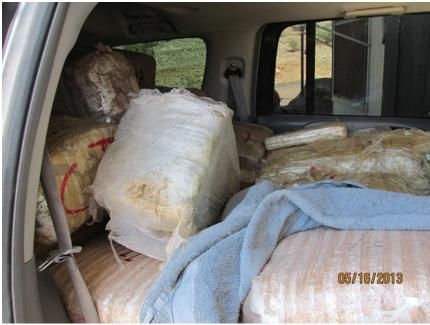 The StarChase pursuit system uses a laser to target the fleeing vehicle. A compressed-air launcher, mounted behind the grille of a police vehicle deploys a GPS tag which adheres to the suspect vehicle and transmits GPS coordinates back to police dispatch. The dispatcher views the location and movements of the tagged vehicle in near real-time on a digital roadmap via a secure Internet connection. Officers in pursuit of the suspect vehicle can precisely locate it and other appropriate response units can be dispatched to the location, eliminating the need for dangerous high-speed pursuits.

About StarChase
StarChase LLC (www.starchase.com) provides pursuit management and GPS tracking technology to law enforcement agencies worldwide. The tactical interdiction offers a safer alternative while still catching the offender. The StarChase system is a proven, less-lethal technology that provides a significant tactical advantage to law enforcement officers in failure-to-yield or high-risk flight situations. Once a vehicle is tagged, it enables a dispatcher to track the suspect in real time using a web-based mapping program. The officer remains on the street, a potentially dangerous pursuit is avoided, and the suspect can then be safely apprehended. The privately held company is based in Virginia Beach, Va. and has been in operation since 2006. StarChase products are patent protected in the United States and worldwide.

Want to know more about StarChase, LLC?
Get info