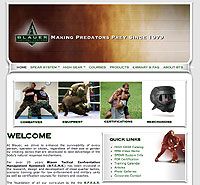 S.P.E.A.R. System™. S.P.E.A.R. stands for Spontaneous Protection Enabling Accelerated Response, and it contains important applications for police officers, military operators, housewives, kids or anyone else interested in being able to survive an aggressive close quarters ambush. Blauer Tactical Confrontation Management Systems (BTCMS) may be the most progressive self-defense training company in operation today and, without a doubt, they have some valuable information to share with anyone concerned about effective self-defense and realistic combative training.Blauer has been instructing and researching close quarters fighting for over twenty years. His training practices and combat theory have evolved over this time because of his constant research and thought on the topic.

Blauer, a life-long martial artist, found that trained responses (such as the classic “wax-off” forearm block) were pitifully ineffective against real ambushes. He also found that when he was truly surprised, his natural flinch response did a much better job of protecting him from the attack. Several years of research and training, are what lie behind The S.P.E.A.R. System™ and the theory of Flinch Conversion—taking your body’s hard-wired response to a sudden attack and converting it into a platform for an effective counter attack.In addition to S.P.E.A.R. System ™ courses for law enforcement and military personnel, BTCMS offers ground fighting and weapons applications of their research as well as their instructor development courses.

BTCMS also consults with a variety of companies and units on training and tactical issues. During 2003, BTCMS worked closely with Federal Express to develop their Cockpit Defense Program. After researching a variety of programs, Federal Express chose Blauer primarily because they were convinced that his programs were easy to learn and retain.

BTCMS concepts are now taught to civilian personnel through the Personal Defense Readiness™ Program (PDR). Several times a year, Blauer holds three-day seminars for martial arts instructors who are interested in adding his theories to their programs. I was able to attend a PDR Seminar last year in Montreal. The list of attendees included full time martial arts instructors from over a dozen different styles as well as several men and women for whom instructing was only a part-time occupation or hobby. It was also interesting that several people were attending their second or third PDR Seminar in order to sharpen their edge and learn what new concepts and teaching techniques Blauer had developed.

The integrity of the BTCMS instructor level courses is ensured by the requirements for certification. Unlike most courses, you cannot simply pay a fee and attend a course to get certified as a S.P.E.A.R. Law Enforcement Instructor or PDR Coach. After the course, members of BTCMS Core Team collect and review several items from students before recommending them to Blauer for full certification. Each student must submit typed and organized notes from the course (my notes from the five-day S.P.E.A.R. Instructor Course took up more than twenty pages), a sample lesson plan and another written assignment, which must demonstrate their understanding of BTCMS concepts. Their standards are very very high.

Almost two years later, after attending several Blauer courses, reviewing most of his videos and spending a considerable amount of time with Blauer and his staff discussing all aspects of their programs and close quarter training, I have begun integrating a great deal of S.P.E.A.R. System terminology and BTCMS lingo into my training. Blauer says that a number of people over the years have told him that he has given them labels and tools for explaining things they’ve known to be true for years. Count me among them. “People sometimes say that my stuff is common sense, says Blauer, “but the truth is that it’s uncommon sense - it only seems simple after it’s been explained.

”Obviously, I’ve spent, and continue to spend, a fair amount of time looking at and talking about other combative training programs. I haven’t found another system that is more universal or reality based. I hesitate to write such a glowing review here, but the truth is the truth and I believe that anyone who is serious about reality based training and effective close quarters self-defense should be familiar with Blauer Tactical Confrontation Management Systems.