How to buy firearm optics (eBook)

A letter to the American public: Are police reform proposals real solutions or chimera?

The PIO is an invaluable part of police transparency

“Suspect has a weapon. Shots fired.”

Three years ago, Georgia police officer Patrick Shaver took a leave of absence. He put his house up for sale, bought a trailer and set out across the country with his wife to interview over 90 police officers, experts and police psychologists.

The documentary “Officer Involved” is a culmination of events and influences that occurred in Shaver’s life and eventually inspired him to do the film.

The film, shot by Shaver and his wife, aims to shed light on the after-effects a deadly shooting has on an officer, an aspect Shaver says everyone seems to forget.

“They forget about everything from the legal aspects to the looming cloud over the officer’s head,” he said. “The officer, right or wrong, has to live with the idea that ‘I’m being sued right now. I don’t know how this is going to end.’”

Shaver is hoping his documentary will help put a human face to a situation that he says is often portrayed in a one-sided manner in the news media.

Shortly after he began his career as a police officer, Shaver says a close friend of his went through an officer-involved shooting and he saw his friend change. Then, another friend asked him why police don’t simply shoot the tires of a car, instead of aiming for the driver.

“Those events and my background led me to look for a documentary from the view of officers that answered those sorts of questions; and I couldn’t find one.”

After a discussion with his wife, they decided to make a film to show people the impact a shooting has on an officer. And he decided to take a leave of absence from his five-year career in law enforcement.

“I … explained to my supervisors and chief that I really wanted to make this film the best I can and get it known,” Shaver said.

Since 2013, they have lived out of a trailer while finishing the documentary and booking screenings. In the spring of 2016, they hit the road full-time to screen it.

With no grants or scholarships backing the project, they took to the open highway. The decided against crowdfunding and instead ask for a fee via ticket sales. Tickets cost a little less than seeing a normal movie would. The money goes to their lodging and fuel for the truck.

“We’re not so much asking people for money; we’re asking them if they want to hold a screening because that gets us further and further down the road. We get to move by word of mouth and social media.”

Brookhaven, Georgia police officer Thomas Lefever, a friend and colleague of Shaver's, says the film gives police officers a voice and shows an angle others may not think of.

“The documentary gives a never-before-seen officer’s perspective of the days, months, and even years of investigation following a deadly force situation,” Lefever said.

He believes the documentary challenges the notions the public has about police officers, which is that there is no real accountability for an officer involved.

“Many times in our society, an officer without a face or a name is declared guilty in the court of public opinion long before light is shed on the facts of the circumstance or the human being that the officer is,” Lefever said.

He said most police officers just want to go to work to protect and serve their communities and come home with a paycheck for their family or to support their lifestyle.

“Usually this search for balance and comfort involves avoiding risks that could interfere,” Lefever said, adding that after watching the documentary, many will likely ask “Why would anyone want to go through that?” An officer who shared his story with Shaver. (Photo/Patrick Shaver)

Through filming and screening the documentary, Shaver has discovered that nearly every officer experienced some type of issue after an officer-involved shooting.

“Whether it was the feeling that I’ve taken a life or the feeling that I don’t know how to go home and tell my family. Maybe it was how they were treated by command staff. In some cases, it was how they were treated by the community. But we saw pretty much across the board everyone had some sort of an impact after being involved in the shooting,” he said.

Shaver says the film doesn’t get into the circumstances of why the officer shot, but picks up with what happens after the shooting.

“I think that’s why it’s important. People can debate why they should or shouldn’t have shot. What’s really not up for debate is the impact that it has on the individual,” he said.

After transcribing more than 90 interviews at two or more hours each, Shaver said he feels very blessed that people who have dedicated their lives to service sat down and shared their time with him.

“I’m just this guy. I’m this cop that works in the community, out in the streets. I’m not a big film producer. I’m nobody special. I was just interested in this project, and here are these people who have spent their lives studying and working around this material. They were willing to just volunteer their time to sit down with me. It was moving every time,” he said. 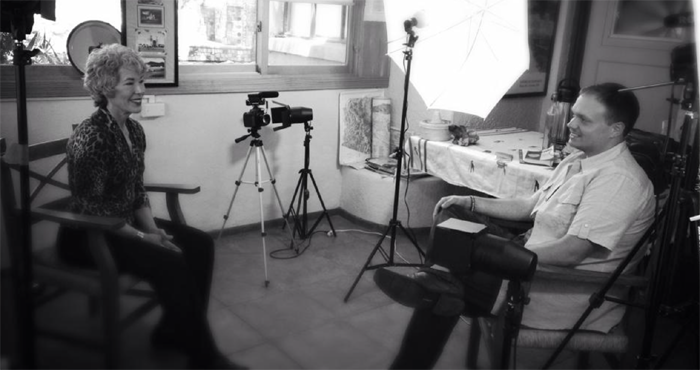 Shaver on the set. (Photo/Patrick Shaver)

The Shavers’ dream to have the film screening internationally has become a close reality with the acceptance into the 2016 Knoxville Film Festival.

Shaver hopes to connect with a distributor who can help get the film across the world.

As for what’s next, he is seeing where the road takes them.

“I do have plans to return to work in April. I love law enforcement. It’s been an incredible job, an incredible career. Where we are right now is something I never planned for. We just have no idea what the future holds. But we’re ready,” he said.