Brought to you by FARO Technologies 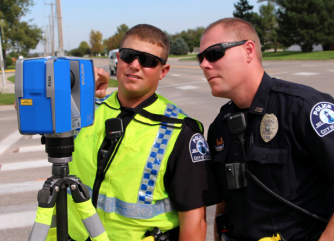 Challenge
Kearney Police Department in Nebraska wanted to reduce the number of officers and massive blocks of time they needed to thoroughly document crash and crime scenes.

Solution
After observing how much evidence could be captured with a 3D laser scanner, as well as the dramatic time savings, the police department adopted the FARO® Focus3D X 330 Laser Scanner to capture crash and crime scenes.

Results
The use of a laser scanner has changed the way Kearney Police Department investigates crash and crime scenes. The lightweight FARO Focus3D X 330 Laser Scanner swiftly captures scenes that once took hours to document with tools that yielded limited and inadequate evidence. The 3D point cloud image of a scene and 3D diagram that can be generated from scanning technology can be powerful for courtroom presentations—helping judge, jury and prosecutor fully understand a scene’s evidence and circumstances.

Huge Time Savings, Thousands of Evidence Points Recorded Per Second
The impact of how much time it takes for a small police department to investigate crime scenes can be substantial. Kearney Police Department in Nebraska is a good example. With a police force of 55 officers serving a population of 33,021 residents, maximizing investigators’ efforts at crime scenes is essential.

This is why the Kearney Police Department purchased a FARO Focus3D X 330 Laser Scanner. “We went from using a tape measure for baseline measurements, pulling 200-foot to 300-foot tapes, up to the total station,” recalled Lt. Mike Young. “But it would take up to six investigators four to six hours to document 200 points, and the only thing we had to show the prosecutor would be a two-dimensional diagram.” The FARO scanner takes a fraction of the amount of time to set up and move when compared to a total station. In as little as five minutes within arrival at the scene, the scanner can be ready to capture millions of measurements. Once the scanner begins working, Lt. Young comments, “I’m capturing absolutely everything the laser scanner can see, and we’re capturing thousands of data points per second—indoors or outdoors.”

Manual documentation methods could not come anywhere close to collecting this volume of evidence points. “The manual methods were accurate based on the measurements that were taken, but the amount of information that you left behind at the scene could never be replaced,” Lt. Young said. Also, the scanner is ideally suited for both indoor and outdoor scenes while Kearney’s old total station was limited to just outdoor scenes.

Scanner Excels At Long, Complicated Scenes—With Superb Accuracy
Kearney Police Department has scanned multiple scenes since purchasing its FARO scanner in 2015. These have included fatality accidents, major injury accidents, suicides, sexual assaults, robberies, hit-and-run accidents, and officer-involved shootings. The scanner shines at complex scenes that extend for long distances. Lt. Young recalls a scene involving a hit-and-run accident near a truck stop on a highway involving a truck and pedestrian. That scene required 22-23 total scans to cover the evidence spread over a quarter of a mile. “We had evidence that spanned this whole distance,” Lt. Young said. Using FARO’s SCENE software, “We were able to put those 22 scans together to make one 3D scene.”

With such large scenes to document, it’s natural to wonder if a laser scanner is fully accurate. No need to worry as far as Lt. Young is concerned. “It’s very accurate,” Lt. Young reported, “the FARO Laser Scanner can scan up to 330 meters distance with an accuracy rate of plus or minus two millimeters.”

The scanner is also ideal for verifying a witness’s point of view. For example, if an obstruction, like a tree or parked car, would have blocked a person’s view of an accident, it would be documented by the scanner.

Scenes Easily Captured in Pitch Dark
The FARO Focus Laser Scanners are unquestionably reliable for scanning daytime scenes, even in full sunlight, but crashes and crimes often happen at night. The scanner also captures data perfectly in the dark. “We recently scanned a gunshot suicide scene that was in a remote area by a campground and there were no lights there,” Lt. Young said. “We didn’t bring in lights. We didn’t need to. We scanned in total darkness and were still able to capture all the measurements and document the entire scene.”

Scanners Supported By Powerful Software
While the FARO Focus3D X 330 Laser Scanner is a powerful tool for measuring a scene, it’s important to have software that can process the data and help the investigator create diagrams and animations. Once a scene is scanned, “All the data is saved to an SD card inside the scanner,” Lt. Young said. “You pop that out, slide it into a laptop port, then import the scanned data into FARO SCENE,” which is used to process the scene and assemble the multiple scans to create one complete 3D model.

Lt. Young also uses another software application associated with the FARO scanner called SCENE WebShare 2Go. WebShare 2Go is a presentation tool that is ideal for law enforcement because it enables the user to capture the entire scanned scene as a self-contained presentation stored on a USB flash drive. Anyone can run the program from the flash drive and view the point cloud and walkthrough of the scene.

Webshare 2Go is an important tool to share details of a scene with the opposing attorney, for courtroom testimony, and for jury deliberation. Lt. Young explains, “In the middle of an interview a question comes up, and the prosecutor can put this flash drive into his laptop, quickly pull up the scene in question and show everyone the scene. It takes very little training, and gives the prosecutor the data he needs.”

Software also makes it possible to scan individual objects and place them accurately in the 3D point cloud of the scene. Lt. Young gives one example of doing this for a motor vehicle accident, “If you towed the vehicles in, you can actually rescan a car in greater detail, in the impound lot. Then, you can place the scanned model into your diagramming program at the final resting position of the vehicle.” FARO’s Reality and Crash Zone software programs can be used to add 3D models to a point cloud in this way, then use the model in a diagram and animation. 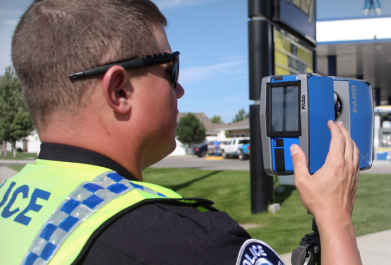 Point Cloud Preserves the Scene Forever
Another aspect the Kearney Police Department appreciates about using their FARO Laser Scanner is its ability to preserve a scene just as it looked upon the investigators’ arrival. Many scenes change rapidly, and important evidence could be missed if the scene is measured manually or with a total station. “You can be in your office and go back and look at the point cloud and find something you may not have seen previously,” Lt. Young said. It is valuable because if new evidence is introduced in a case, or if a closed case is ever reopened, the scanned scene will still be preserved.

Although photographs are taken at every scene, they usually show only a very small segment of the entire scene. “With the scanner, you can go back and look at something you may not have seen previously, measure it, and know exactly where that was in relationship to other pieces of evidence,” Lt. Young said.

Fire Scenes Also Ideal For Scanning
Laser scanning has proven equally effective for another application: fire investigation. When Lt. Young and his team demonstrated their FARO Laser Scanner at a meeting of state fire marshals in Kearney, there was immediate interest. Since holding the demo, Kearney Police Department has helped scan fire scenes, one of which involved the death of a teenager. With it being a both fire and crime scene, investigators were able to capture evidence early on.

Scanning the fire scene was powerful and revealing, said Lt. Young. “Photography at a fire scene is generally difficult because of the amount of charring,” Lt. Young said. “All of the light is absorbed. So, even if you use a flash when photographing, your pictures may not capture the necessary detail.”

The FARO scanner picked up fire scene evidence that proved critical for investigators. “With the scanner, we were actually able to see the charring on the trusses for the roof,” Lt. Young explained. The scanner also helped investigators pinpoint the area of the fire’s origin and how the fire spread throughout the entire trailer.” The impact of the FARO Laser Scanner’s abilities on the fire marshals was huge and immediate. In fact, noted Lt. Young, “They are now interested in purchasing their own laser scanner.”

Conclusion
When a law enforcement agency investigates a crime or crash scene, it means mobilizing investigators and equipment. This translates to tapping the agency’s most valuable commodity: time. So, it’s no wonder that more agencies are turning to laser scanning as a faster way to document scenes and capture the entire field of evidence data, with higher accuracy than achieved ever before.

To this day, investigators at Kearney PD know they made the right choice by transitioning to laser scanning. Not only does scanning allow the investigators to capture more data, they are doing it with fewer people at the scene.

“Before the scanner, we would typically have four to six officers and take up to six hours to document a scene” using the old tape measure and total station methods. “Now, I can go out to a scene myself or with one other person. We usually scan and leave the scene in two hours or less,” said Lt. Young. This huge time savings is exactly what the investigators of Kearney Police Department were hoping to realize with the FARO3D X 330 Laser Scanner.

About FARO Technologies
FARO is the world’s most trusted source for 3D measurement technology. The company develops and markets computer-aided measurement and imaging devices and software. Technology from FARO permits high-precision 3D measurement, imaging and comparison of parts and compound structures within production and quality assurance processes. The devices are used for inspecting components and assemblies, production planning, documenting large volume spaces or structures in 3D, surveying and construction, as well as for investigation and reconstruction of accident sites or crime scenes.

Want to know more about FARO Technologies?
Get info