LAS VEGAS — Today, Casio G-SHOCK announces the addition of two color additions for the Master of G GRAVITYMASTER series, available starting this July on the new, connected GPW2000 model, as well as the GA1100 model. Both watches will feature a Military Green color way with the GA1100SC also featuring a traditional camouflage pattern on the band. In addition both models feature a layered band with orange underneath. Tying in with theGRAVITYMASTER’s overall flight theme, the new color variation evokes an image of toughness, alluding to the patterns and colors found in military uniforms and flight jackets. The timepieces will be on display at COUTURE from June 2-6 at the Casio G-SHOCK booth located at the Wynn and Encore, booth CT-104/105. 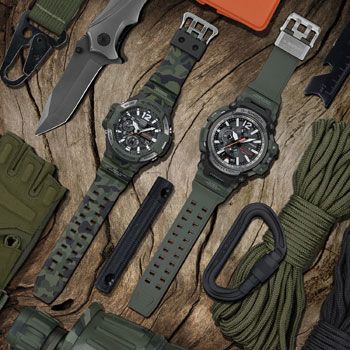 The GPW2000-3A is the latest GRAVITYMASTER model to feature connected GPS capabilities, including Mission Stamp – an innovative function that records time and location, while transmitting the information via Bluetooth to a dedicated G-SHOCK mobile app.

Both the GPW2000-3A and GA1100SC-3A come equipped with G-SHOCK’s legendary structure of 200M water and shock resistance. Other technologies include a dual world time display and super LED backlight.

About G-SHOCK
CASIO’s shock-resistant G-SHOCK watch is synonymous with toughness, born from the developer Mr. Ibe’s dream of ‘creating a watch that never breaks’. Over 200 handmade samples were created and tested to destruction until finally in 1983 the first, now iconic G-SHOCK hit the streets of Japan and began to establish itself as ‘the toughest watch of all time’. Each watch encompasses the 7 elements; electric shock resistance, gravity resistance, low temperature resistance, vibration resistance, water resistance, shock resistance and toughness. The watch is packed with Casio innovations and technologies to prevent it from suffering direct shock; this includes internal components protected with urethane and suspended timekeeping modules inside the watch structure. Since its launch, G-SHOCK has continued to evolve, continuing to support on Mr. Ibe’s mantra “never, never give up.” www.gshock.com