The OSWC was held at Camp Robinson, on the outskirts of Little Rock, AR on March 26-27, 2006. The Original S.W.A.T. Footwear Company is Title Sponsor of the world's most elite SWAT competition. The competition is an invitation-only, international World Championship designed to test the mental toughness, physical fitness, and weapons skills of the world's top SWAT teams. It is recognition of a team's excellence just to be invited to participate.

This year, the Germans found it much tougher this year, winning 4 out of 8 individual competitions - 24 points. Last year, they made a clean sweep, taking first in every competition. San Antonio SWAT has always been GSG-9's main competition, and this year they were ready, winning one challenge and finishing with a total score of 29. Lexington came in at 35 points, and Dallas SWAT, stars of their own show on A&E, finished fourth with 46 points. 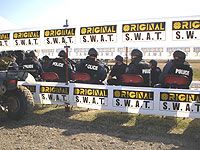 The competition consists of eight grueling, live-fire events. Their descriptive names hint at the unique stresses of each task: Sniper Challenge, Masked Entry, Three-Gun Challenge, Zodiac Attack, Original SWAT Range Run, Carbine Car Assault, Pistol Shoot-Off and LEOPARD Challenge. All events are performed head-to-head, unique in SWAT competitions. Six-officers comprise a team. Each competes wearing handguns, full tactical gear (helmets, body armor, and LBE utility belts), shoulder-fired weapon and in some situations, specialized equipment such as gas masks or SCBA. The shooting requirements are precise with only one round provided for each target and severe time penalties for each miss. The events are scored objectively, based on targets hit and time, with the fastest total time winning. The action is fast-paced and demanding with teams performing like professional athletes to accomplish their missions. The overall winning team of the OSWC is crowned World Champion.

Filmed for Outdoor Life Network, the OSWC will appear on OLN later this year, along with Original SWAT Footwear's Emmy-award winning television commercial. The commercial stars the Shelby County (TN) SWAT team, who also were participants at this year's challenge. Check the Original SWAT website or your local listings for times and dates in your area.

Original S.W.A.T was founded in 1999 with the goal of "building a better boot." It has now grown to be one of the top providers of tactical footwear for law enforcement, military personnel, security, and public safety workers. Original S.W.A.T. is the most comfortable boot on the market, while retaining superior tactical performance. For further information, visit www.originalswat.com or call (209) 545-2500.