Officers & alcohol: How much is too much?

No Monell liability for TASER device use and policy

Teach, coach, mentor: Effective leadership is about influence and inspiration

From athletes to officers: LEOs offer advice to football teammates who joined LE together

Beyond the baton: 5 forgotten police weapons

What did police officers use before ASPs and TASERs?

The use of batons and other similar weapons is in steep decline across the board, but some officers argue they still have a place in law enforcement, especially with the right training.

With that in mind, here are five old-school police weapons we don’t see around much anymore.

The sap, slapper, or blackjack is a heavy leather pouch, eight to twelve inches long, filled with lead and sometimes a flexible steel rod. Unlike a baton, a sap’s size and shape allowed it to be concealed inside an officer’s pocket.

Saps may not look as intimidating as a gun or a baton, but thinking they’re not dangerous would be a mistake. A sap is dense enough to break bones when the user has room to swing, and the leather edge is rough enough to cause a dull, ripping laceration to the face when used as a jabbing instrument. Slappers would be ideal for use in ultra-tight quarters like a fight on the ground against a large suspect.

Slappers are a bit of a rarity these days, forbidden from carry or use by many jurisdictions across the country. Even so, some uniforms still come with a sap pocket.

Straight batons are more intuitive to use, but side-handle batons like the PR-24 and tonfa can give the well-trained officer several defensive options that make use of the weapon’s side handle. When the long side of the baton is braced against an officer’s wrist, it may be used to shield them against incoming strikes.


Released in the mid-1990s, the Rapid Rotation Baton is a version of the side-handle baton that adds a spinning factor into the mix. It seems like it could be useful in the right hands, but would also require a lot of training to use to the fullest.

The Orcutt Police Nunchaku (OPN) is the most popular kind of police nunchaku, and has found some use in some jurisdictions in Northern California and Colorado.

This set of nunchucks is not used exactly how you’d think. Though the OPN can be used as a striking weapon, it really shines as a grappling implement on the wrists and ankles for pain compliance.

They turned out to be quite effective in this regard, but improper use has been associated with serious injuries like wrist and limb breaks. These were phased out of use in the LAPD after 30 individuals filed medical complaints against the city following an anti-abortion protest in 1991. 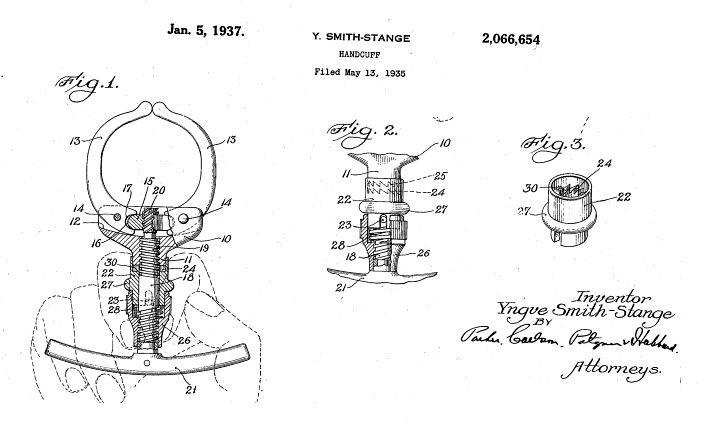 The Argus Iron Claw was a forceful come-along tool that gave the officer a large degree of control over the wrist of a suspect. If the suspect did not comply or was combative, breaking a wrist was a simple matter of applying leverage.

Though the first “mechanical nippers” surfaced in the late 1800s, American Police Equipment notes that versions of this device were used at least through the 1950's.

Since early law enforcement professionals relied on their batons so often, there was actually a quite popular movement to outfit police batons with implements like whistles, torches/flashlights, and tear gas. At least four models were built with weapon-retention devices that would deploy “sharp spikes or blades” in case a suspect tried to grab an officer’s baton. The text of American Police Equipment even mentions two early 20th century patents for batons with guns built into the frame.

All of these implements seem like decent ideas on paper, but unfortunately, additional modifications added to the baton made it a poorer striking weapon that would sometimes break under stress.

Are there any unconventional, less-than-lethal police weapons we forgot about? Let us know in the comments below or reach us on our Facebook page!

Defensive tactics training: Enhancing front compliance for a person who is ‘feeling no pain’