With so many models to choose from, identifying what your job requires from a bicycle can help narrow down the field. 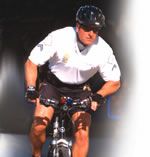 Lance Armstrong has it easy, by comparison. His job is very predictable - he knows what races he’ll ride during the season, so he gears his training for those races. There are few surprises.

Now consider the “typical” bicycle patrol police officer. Like any law enforcement officer out there on the street, his job is very unpredictable. Like Armstrong, he or she will spend many hours a day on the bike, but that’s where any similarity ends.

The cop often cruises a beat, talking to people, answering questions, simply furthering public relations for the department. But in an instant, he or she may be called into action that maxes his heart rate as surely as ascending L’Alpe d’Huez does for Tour de France competitors like Armstrong. The officer may have to launch down a flight of stairs en route to a trouble spot five blocks away. Once there, he may have to throw the bike down and restrain a suspect.

It’s all in a day’s work for a bicycle patrol officer and, like any other item in the department’s inventory, the varied demands of the job make the police patrol bicycle rather unique compared to one a civilian might want.

Of course, like civilians, no two police bicycle patrol officers are alike and, when it comes to bike features required or desired, there are few hard and fast rules. In other words, a police patrol bicycle must be affordable, durable, and versatile, but beyond that, one sometimes gets into the realm of purely personal preference.

Let’s start with the basics. First of all, there are hundreds—if not thousands—of bicycle models available for sale. Even among mountain bikes (preferred for police patrol use because of their durability and versatility), you could practically fill a phone book with all the different types available, and they range in price from $150 bargain basement leftovers to custom jobs that go for $3,000 and up. Among the models we investigated that are marketed specifically as police bicycles, prices ran roughly in the $500 to $1,500 range. As Officer John Chapman of the Monterey (Calif.) Police Department points out, “With the current budget climate, it’s all about getting as much bike for the buck as possible.”

Chapman hopes his unit gets new bicycles next year and is pushing for a mid-priced model. Realistically, he notes, “It’s not the cat’s ass—WWLR (what would Lance ride?)—of patrol bikes, but it will get the job done very well for a reasonable price, right at a grand.”

For those whose departments might be considering going the low-buck route, another bike patrol officer with an agency in Ohio cautions, “The main thing is, don’t go out to Wally World and buy a bike thinking it will hold up to the rigors of police duty. I am a certified International Police Mountain Bike Association instructor. I taught a class two years ago where a department sent some officers with Huffy bicycles. I could not believe it. The officers were embarrassed but didn’t have a choice. I did an inspection on the bikes and DQed them pretty darn quick. They ended up taking the course using a few bikes out of our department’s inventory.”

Don’t take that as complete disdain for Huffy bicycles (or any other inexpensive ones). They have their place in the market and do a fine job there. Police work, however, is probably not their ideal place. That’s because bicycles used for police work have to be durable—no ifs, ands, or buts.

An officer who works bike patrol at a police department in South Carolina knows that spending a little more money may not guarantee against things breaking, but after-sales service and warranties are likely to be more comprehensive. He says, “We purchase Treks. They are lightweight, use durable parts in their construction, and are priced fairly cheaply when compared to the civilian version. I don’t know about the other manufacturers, but every time we crack a Trek frame, they send us a new one without any trouble,” the officer says.

He knows from experience that a bicycle has to do more than look pretty if it’s going to hold up to the abuse of the job.

“It sounds bad to crack a frame,” the officer says, “but when you put 5,000 or 6,000 miles a year on a bicycle and throw in curbs, stairs, cobblestone streets, and bike throw-downs, I am not at all bothered by a little breakage.”

Notice that “…curbs, stairs, cobblestone streets, and bike throw-downs” are common in 5,000 or 6,000 miles per year. That’s not to mention the likelihood of having to traverse off-road conditions like sand or mud or maybe even crossing fallen logs or creeks if you patrol parks or are close to rural areas. A good mountain bike lets you tackle a variety of obstacles efficiently.

One of the first items that bike enthusiasts examine—and those purchasing bicycles for police duty use should do likewise—is the frame. Nowadays, frame materials are usually some form of steel (chrome-moly is generally best), aluminum, carbon fiber, or titanium. Of these, aluminum seems to offer the best combination of lightness, durability, and cost for law enforcement duty.

Frame size gets into personnel-specific requirements. A single frame can fit only so many different sized riders. While you can fine-tune a bike with different height seat posts and handlebar stems, it’s unrealistic to expect one frame to fit riders from, say, 5-foot-2 to 6-foot-5—and as we know, there can be a wide variance in officer sizes. For example, according to Chapman, the three-man bike unit at the Monterey PD ranges from 5-foot-5, 150 pounds to 6-foot-1, 200 pounds. That’s why there are different sizes of frames.

Ideally, you want to get the proper frame size to match the intended rider, a task that the local specialty bike shop can help with. Mismatching frame size to rider can result in overuse injuries (especially knees) that can remove an officer from the street. But if the budget won’t allow buying different bikes for the gamut of officer sizes, remember that you can better fit smaller frames to larger riders than vice versa.

Bike geeks also pay close attention to the components, especially the drivetrain (shifting system and front and rear derailleurs). Shimano components are probably the most widely used. Three sprockets in front (the crankset) are universally found; in back will be a six-, seven-, eight-, or nine-sprocket cassette, thus providing a total of 18, 21, 24, or 27 different gear ratio combinations or speeds to choose from. Thumb shifters are the most common and work well, although a few people prefer twist-grip shifting.

When it comes to pedaling, there’s no question that keeping your feet fixed to the pedals is the way to go for the most efficiency. While there are those who prefer the old school “cages” that permit easy entry/exit, the clipless systems devised by companies like Shimano (with its SPD pedals and matching shoes) are more efficient and nearly as fast to get into and out of. All it takes is a little practice (usually a simple twist of the foot) to lock in or get out.

And with the right shoe made for the system, you don’t sacrifice the ability to engage in a foot pursuit. The locking system in the shoe’s forefoot can be somewhat recessed into the sole (which remains on the stiff side) so you’re not running around strictly on the locking system which, of course, would offer precious little traction.

While center-pull brakes are simple, light, and work effectively, some bicycles now offer disc brakes at one or both ends. This is a fairly recent development in bicycles, though disc brakes have proven themselves in motorized vehicles and are the standard. Miniaturizing the system for bicycle use so it works well without a huge weight (and cost) penalty has been the goal, although companies like Magura and Shimano offer disc brake systems suitable for mountain bike use.

Suspension is now an integral part of the mountain bike scene as well. So much so that you almost can’t find one today without at least a suspension fork. All police bicycles come with front suspension, and some models offer rear suspension as well. The jury is still out on which is better.

Some riders like the added comfort of front and rear suspension (also called full suspension), pointing to reduced fatigue and greater control in extremely rough conditions (as when descending a flight of stairs). Others feel that many rear-suspension designs allow too much up-and-down motion or “bobbing” while pedaling hard, as when climbing hills or trying to accelerate quickly.

Some companies equip their full-suspension bikes with “lockouts” that, in effect, turn the rear suspension as rigid as a “hardtail” simply by pushing a lever. Others have taken pedaling forces into account and designed proprietary rear-suspension geometry to negate bobbing and other energy-eating forces while allowing the suspension to work full-time.

The best way to decide which is best for you and your department’s needs, of course, is to demo them in a variety of likely conditions—something that most bicycle vendors should permit.

Of course, if a full-suspension bike is ruled out, don’t forget that you can equip the bike with a suspension-type seat post. They can run as little as $30. But, again, you get what you pay for. The Cadillac of suspension posts is probably the Cane Creek Thudbuster LT at around $150.

Speaking of seats, when you’re going to be in the saddle for many hours a day, several days a week, comfort becomes a high priority. Most manufacturers realize this; thus, you won’t find the super-thin and hard-as-a-rock racing seats on most police patrol bicycles. Still, if the standard saddle proves to be uncomfortable after a period of acclimation, there are options.

This is especially important for female officers since most standard police bikes come with seats designed for the male body. Serfas and Specialized are two aftermarket companies that offer saddles with an eye to comfort, using anatomically influenced designs and different materials.

Flat-proof tires aren’t quite a reality, but you can get close with tire liners and heavy-duty tubes. There are solid-rubber tire/tube combinations around, but the consensus is that they have a terrible “feel” when riding. Specialized, however, offers several models of tires with what it calls Armadillo Technology. These seem to have a good reputation for puncture resistance.

There’s plenty more to look at when outfitting the bike—lights, sirens, bags, communications gear, etc.—but this covers the basic bicycle. One thing to keep in mind is, don’t completely disregard a company that doesn’t offer a dedicated police patrol bike.

For example, Schwinn donated a couple of its Rocket mountain bikes last year to the University of Wisconsin at Milwaukee’s campus police. In another case, like some bicycle patrol units starting out, one police officer with a California department had to purchase his own bike and went with a full-suspension Specialized Enduro Expert. Many bicycle companies or local dealers will work with you if you feel that one of their products might fit your needs, even with a few changes from the normal civilian-duty bikes.

Mark Kariya is a Los Angeles-based freelance writer who reviews bicycles, as well as motorcycles and automobiles.