Flushing, New York— Looseleaf Law Publications is proud to announce the release of, gunFIGHT! An Integrated Approach to Shooting and Fighting in Close Quarters, a more than 200-page book authored by seasoned firearms and defensive tactics instructor Richard Nance. In addition to continuing to serve as a sworn police officer after nearly two decades on the street, Nance is also a highly accomplished martial artist, widely published author and a television personality. 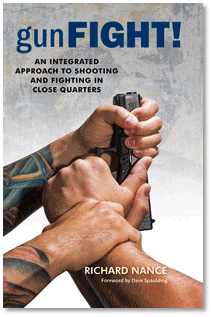 gunFIGHT! fills a critical gap in the realm of firearms training by delving in to the area of fighting with a gun—either in your possession and drawn, in your possession and holstered, in the possession of an aggressor, or a combination of all of the above—in a close-quarters environment. “There are many books designed to train individuals on the use of a firearm agains an opponent posing a threat from some distance,” says Looseleaf Law President Michael Loughrey, “but far less that deal with an attacker who is virtually on top of you in terms of proximity. The dynamics change dramatically in those scenarios. It’s absolutely critical that those who carry a firearm, or may be confronted with one, are aware of the defensive tactic nuances of these types of encounters and are prepared to survive them,” Loughrey continues. “This book arms them with the information they need to survive and we’re honored to have the privilege of making it available.”

Supported by a rich collection of step-by-step photographs that clearly demonstrate the close quarters combat techniques being described, gunFIGHT covers an impressively wide range of topics, including in-hand gun retention techniques, tactics for defeating an opponent’s draw stroke, using your firearm as an impact weapon, strategies for handling multiple assailant attacks, ground fighting techniques, shooting from various retention positions, and effectively employing a variety of striking methods to aid in firearm retention efforts. Additionally, Nance shares valuable advice on gun and holster selection as well as tips for training techniques that can prepare you for close-quarters self-defense.

Designed for use by both law enforcement personnel and civilians, gunFIGHT also explores important legal considerations related to firearms possession and the possibility of delivering deadly force defensively. Nance also explores mental conditioning techniques that can prepare you to effectively employ your firearm in a close-quarters event, if necessary, and survive the incident not only physically and legally but psychologically as well.

“One of the more fascinating and unique elements of gunFIGHT! is its exploration of the psychological anomalies involved with an armed, close-quarters battle,” observes Loughrey. “Being aware of these issues and being fully prepared to overcome them can literally mean the difference between life and death.”

gunFIGHT! An Integrated Approach to Shooting and Fighting in Close Quarters ($23.95, 234 pgs., Softcover, ISBN: 978-1-60885-140-9) is available directly from Looseleaf Law Publications by visiting their online catalog at www.looseleaflaw.com or calling toll-free: (800) 647-5547. Electronic versions soon to be available at looseleaflaw.com, iBooks and
amazon.com.

Want to know more about Looseleaf Law?
Get info