A police officer's journey to health after a 'mini-stroke'

Tactical, pocket carry and weapon-mounted: A smorgasbord of new lights from Streamlight

7 investments worth every penny for law enforcement

MUNCY, Pa. — State police were using shotguns Thursday to deflate a wayward surveillance blimp that broke loose in Maryland before coming down into trees in the Pennsylvania countryside.

It could take days, or even weeks, to remove the blimp, which came down Wednesday, said U.S. Army Captain Matthew Villa. He said it is in two "mostly intact" pieces, with the main body and the tail section a few hundred meters apart.

Very sensitive electronics onboard have been removed but the vast majority of blimp is still there, Villa said. The wreckage was secured with additional ropes and state police troopers were using shotguns to deflate it Thursday morning, he said. 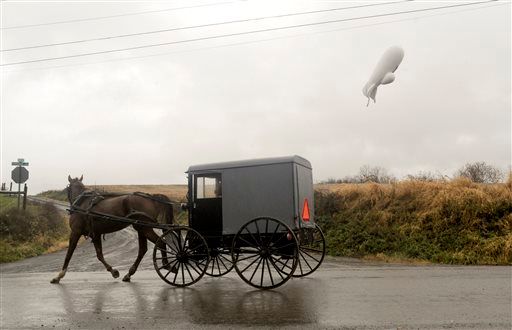 The blimp's remains were in trees along a ravine in a hard-to-access area with no roads leading directly to the site and officials are working on the removal plan.

"The terrain is extremely steep," he said. "It's rocky, slippery, leaves, in fact there's a stream going through the site as well."

The slow-moving, unmanned Army surveillance blimp broke loose from its mooring at Aberdeen Proving Ground and then floated over Pennsylvania for hours Wednesday afternoon causing electrical outages as its tether hit power lines.

The 240-foot helium-filled blimp, which had two fighter jets on its tail, came down near Muncy, a small town about 80 miles north of Harrisburg, the state capital. No injuries were reported.

The radar-equipped blimp, fitted with sensitive defense technology, escaped from the facility around 12:20 p.m. Authorities said it drifted northward, climbing to about 16,000 feet. It covered about 150 miles over about 3½ hours.

Villa said it was also unknown how the blimp broke loose, and an investigation was underway.

People gawked in wonder and disbelief as the blimp floated silently over the sparsely populated area, its dangling tether taking out power lines.

Tiffany Slusser Hartkorn saw it fly over her neighborhood on the outskirts of Bloomsburg around 2:15 p.m. and soon disappear from sight.

"I honestly was worried that there were people in it that would be injured. A neighbor down the road is thinking it knocked down a tree branch and power pole by his house that could've potentially destroyed his house," Hartkorn said.

About 27,000 customers in two counties were left without power, according to electric utility PPL. Electricity was restored to most people within a few hours.

Maintaining a calm demeanor amid chaos

How I used cover, space, time and calm to de-escalate a volatile situation

Not so neighborly conduct