Developed after 9/11, the N-DEx System is the FBI’s next step leading the way to more widespread information sharing

On August 7, 2015, a trainer for the Rocky Mountain Identification Network (RMIN) of the Regional Information Sharing Systems (RISS) conducted a workshop about the National Data Exchange (N-DEx) System for members of law enforcement in Valley County, Idaho. A detective attending the workshop was applying the workshop training to an active case of his when he searched the Federal Bureau of Investigation’s N-DEx System for the name of a potential gang member. The detective discovered a recent arrest of the subject in California, and through the information contained in the record, he obtained the names of the arresting officials. Without the N-DEx System, the detective likely would not have been able to track down the same information.

Developed after 9/11 and deployed in May 2008, the N-DEx System is the FBI’s next step leading the way to more widespread information sharing across the nation. As Acting Unit Chief John Quinlan of the N-DEx Program Office states, “N-DEx was created in part due to the 9/11 Commission’s report, which recommended increased communication between local, state and federal law enforcement and criminal justice agencies.” It is the only national investigative information sharing system offered at no cost to users or data contributors. The N-DEx Program Office is headquartered in the FBI’s Criminal Justice Information Services (CJIS) Division in Clarksburg, West Virginia, alongside many of the more commonly known systems such as the National Crime Information Center (NCIC), the Interstate Identification Index (III), the Next Generation Identification (NGI), and the National Instant Criminal Background Check System (NICS).

The success of the N-DEx System is due in part to the strategic partnerships the N-DEx Program Office pursues. One such partnership, with the United States (U.S.) Naval Criminal Investigative Service (NCIS), has resulted in thousands of N-DEx System users and tens of millions of shared records. The NCIS Law Enforcement Information Exchange (LInX) System interfaces with the N-DEx System to share records with all users and facilitate searches of all data from both systems.

Used By Many Entities
An example of this success came on July 16, 2015, when an active shooter incident resulted in the deaths of four U.S. Marines and one U.S. Navy sailor at a military recruiting center and a reserve center in Chattanooga, Tennessee. In addition, a police officer from the Chattanooga Police Department and a Marine were wounded. The NCIS Multiple Threat Alert Center received partial identity information for the shooter, who was killed in the incident. The partial identity information was used to conduct searches of the Defense Data Exchange (D-DEx), which through strategic partnerships, also spawned queries of the LInX System and the FBI’s N-DEx System. The additional records provided identifying information on him, his family, his vehicle, and his association with Tennessee and Virginia. The subject had many possible combinations and spellings of his name, and the N-DEx Known Person Result was instrumental in finding additional data.

NCIS Special Agent/Division Chief Kris Peterson stated: “The FBI ‘Known Person’ record developed by and available in N-DEx really proved its worth in this case. NCIS, representing the D-DEx and LInX Systems, is proud to be a strategic partner with the FBI and its N-DEx System in furtherance of law enforcement information sharing.”

Agencies may also define exactly how they would like their information shared with other criminal justice professionals. Contributing agencies do not have to make their data visible to all N-DEx System users. For example, an agency’s Source Data Administrator can set up sharing rules to have data as visible (green) to law enforcement and only provide department pointer information (a telephone number or an e-mail address) to the non-sworn users to follow up directly with the agency that owns the data.

Or an agency can have certain case types — for example, sexual assaults or juvenile cases visible only to users in their state and not visible (red) to all other national users. State CJIS System Officers (CSOs) manage users with a toolset in the N-DEx System that allows them to enable certain capabilities. For example, CSOs can authorize N-DEx System users to also query the III or the NCIC systems from within the N-DEx System interface, or disable their N-DEx System access entirely. The N-DEx System was designed with these and other controls in place to ensure the security and manageability of N-DEx System data and users.

One-Stop Shop
From the beginning, the N-DEx System was designed to be the “one-stop shop” for criminal justice information. This is underscored by the partnerships mentioned above, as well as others in the works, and by the amount of federal data available in the system. The N-DEx System facilitates the search of data from the FBI, the Department of Homeland Security (DHS), the International Criminal Police Organization (INTERPOL), the Drug Enforcement Agency (DEA), the Bureau of Alcohol, Tobacco, Firearms and Explosives (ATF), and the Bureau of Prisons (BOP). The N-DEx Program Office is cultivating partnerships with additional COPLINK nodes, RISS, International Justice and Public Safety Network (NLETS), eGuardian, and others. The N-DEx System already provides access to more than half a billion searchable records and regularly maintains search response times of under four seconds.

The N-DEx System isn’t just a data repository, but it includes numerous tools available to its users to help “connect the dots” between seemingly unrelated information. Entity extraction and entity resolution correlates the data and forms relationships between people, vehicles, locations, telephone numbers, crime characteristics, and more. Users can view an Integrated Person Entity View (IPEV) which provides a snapshot of that subject’s name(s), aliases, ID numbers, the most recent photo, and more; users can expand relevant records with the click of a mouse. The system also offers Geo-Visualization, where records can be plotted on a map, and Link-Visualization, where a user can see related records in the form of a link diagram. 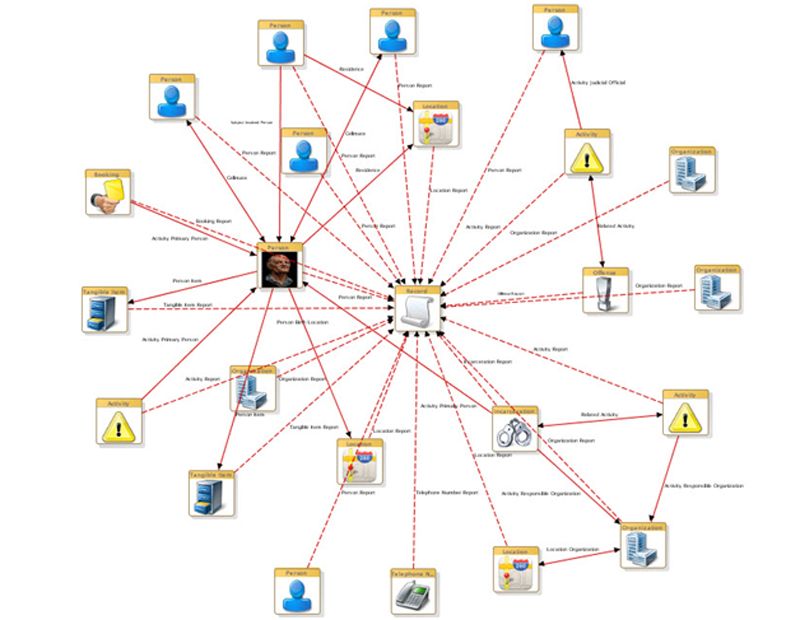 A Force Multiplier
Current system usage is thriving, at an average of half a million searches per month. Users can search for key words, people, vehicles, locations, telephone numbers, property, or crime characteristics. Results can be filtered by submitting state or agency, geographical area as a polygon on a map, or the date range of the records. Once a user has conducted a search, the system provides another powerful feature: Subscription and Notification. Users can subscribe to a search one time, and they don’t have to repeat the search. They can let the system work for them, obtaining a notification if and when a new record matching their criteria enters the system or when another user searches for that same criteria. This connects users to their results or to other users who are interested in the same person, place, or thing. The N-DEx System is a “force multiplier,” allowing users to access more information in less time. Users can even set up a collaboration site, invite other users to join, and securely share files of any type or size.

Another powerful feature that contributes to significant time saving is Batch Query. Users can upload spreadsheets of data, and the system can conduct thousands of searches at one time. The user can then return later and review only records that returned positive results. This feature was recently used by investigators searching for law enforcement contact from a large list of subjects on probation and parole. Through this project, the agency reported an incredible 8 percent hit rate revealing dozens of leads where there were clear violations of the terms of the subjects’ releases. In some cases, results even showed subjects incarcerated in other jurisdictions, which is clear evidence of a violation of their probations/paroles.

Just having your agency’s data in the N-DEx System also provides tremendous benefit. As Sheriff Lawrence Stelma of Kent County, Michigan states, “I get just as much benefit from having my agency’s data in N-DEx as my staff gets from conducting searches. Investigators from across the country are constantly bumping into my cases and helping solve my county’s crimes.” Each agency provides a contact phone number for its data that users see when they open a record. If the information is relevant to its case, staff can reach out immediately and directly to the agency to verify the information and obtain permission to act on it.

The N-DEx System can also be used for criminal justice-related background checks, according to the guidelines in the N-DEx Policy and Operating Manual. One agency reported using the N‑DEx System on every police department applicant to support or refute the information provided on his/her application and in the interview process. The N-DEx system could uncover some undisclosed type of criminal activity (including misdemeanor warrant or incident report data) that could end the hiring process of prospective officers.

The N-DEx System is endorsed by a host of professional organizations, including the International Association of Chiefs of Police, the National Sheriffs’ Association, the Major Cities Chiefs Association, the Major County Sheriff’s Association, the Corrections Technology Association, the Association of State Correctional Administrators, the American Probation and Parole Association, the Interstate Commission for Adult Offender Supervision, and the FBI National Academy. The N-DEx System is accessible as a web-service through the FBI’s Law Enforcement Enterprise Portal (LEEP). Authorized criminal justice users with a valid criminal justice purpose and reason for each search can query the N-DEx System, 24 hours a day/7 days a week/365 days a year. It is accessible through Internet Explorer or Firefox and from any secure internet connection, including on mobile devices. Some states have existing systems that act as an “identity provider” to the N-DEx System and permit access through a user’s existing login to a state or regional portal. To request N-DEx access from the LEEP portal, simply click on your federal or state’s “Sub-Sig,” and request an N-DEx account.

The N-DEx Program Office presents awards to selected users of the system who nominate their success stories about their positive use of the N-DEx System. The “FBI N-DEx Excellence in Information Sharing Award” is given to several users and their departments each year based on usage conducted in the previous calendar year. Additionally, the top success story of the year is presented with the prestigious “FBI N-DEx Success Story of the Year Award.” Users may submit their stories directly from the System, either through the Success submission button or Feedback option, or submissions can be sent by e-mail directly to the N-DEx Program Office here. In the words of a 2015 FBI N-DEx Excellence in Information Sharing Award winner, Capt. David Baisden of the Oklahoma County Sheriff’s Office, “N-DEx is a tremendous tool for law enforcement, and in my opinion, is vastly underutilized.”

About the Author
Kasey Wertheim is a Project Manager with the N-DEx Program Office at the FBI’s CJIS Division’s in Clarksburg, West Virginia. As a former forensic scientist with a state crime
laboratory, he knows first-hand the value of law enforcement information sharing in the 21st century. He can be reached at kasey.wertheim@ic.fbi.gov.