5 ways to stop surviving and start thriving in law enforcement

10 ways to get the most out of a virtual conference

Breaking the cycle of mistrust

The Science of Training

Does de-escalation endanger police officers or save lives?

There is a dire need for peer-reviewed research in law enforcement that speaks to policy, practice, training and tactics around de-escalation

There has been significant discussion and some media reports regarding a recent research project by Brian Landers, a former police officer and current chair of a college criminal justice department.

Lander’s graduate capstone, “An Analysis of a Nation-Wide Use of Force De-Escalation Policy and the Impact on Officer Safety,” takes aim at some of the Police Executive Research Forum’s (PERF) de-escalation language in PERF’s Guiding Principles on Use of Force report and its inclusion in law enforcement policy.

Landers’ capstone project’s stated purpose is to test the hypothesis that “…officer safety is increased when force de-escalation policies are in effect, and therefore officer deaths and injuries should be reduced.”

While the report’s narrative indicates the hypothesis is disproven, some media reports and social media discussion boards have skewed the results to a finding that de-escalation policies increase officer injury and death. I do not believe either to be true based on the data or the method of evaluation.

I spoke with Landers, and it was evident he is concerned about the direction of use of force policy language – as we all should be. Don’t misinterpret my critique of Landers study as being for or against de-escalation training. Various de-escalation techniques are important, but a policy or belief that “thou shalt de-escalate” every situation is also problematic. Regardless, it is important to know that Landers agreed that his research does not empirically prove de-escalation policies cause increased officer injuries and death. However, we both agree there is a need for future study and that innovative law enforcement agencies must take the lead in evidence-based policing.

A preferable manner to establish causation through experimental research is by gathering initial data (e.g., officer killed/injured), introducing a treatment (e.g., de-escalation policy) and then determining if a statistically significant change occurred.

Control variables (e.g., de-escalation techniques used or not) should be included to ensure the “treatment” caused the change, if it exists.

Landers’ capstone project provides data on law enforcement officers injured and killed in several cities in the United States. A portion of the cities implemented de-escalation language at some point during the evaluation range.

Part of Landers’ narrative presents descriptive data as frequencies (e.g., officers killed) that are shown before and after the policy change.

Questions we must ask include:

We also want to know if crime rates, calls for service or proactive policing increased or decreased during the same time.

None of these questions are answered in Landers’ capstone project. Answering them requires access to departmental data and intensive research. However, it is possible to restructure Landers’ data in a more realistic way.

1. There is not a lot of pre/post data to compare;

2. Some data should be removed all together based on its relevance. For instance, the four Dallas PD officers killed by an active shooter are removed from my analysis as those deaths cannot be attributed to de-escalation policy in this context. 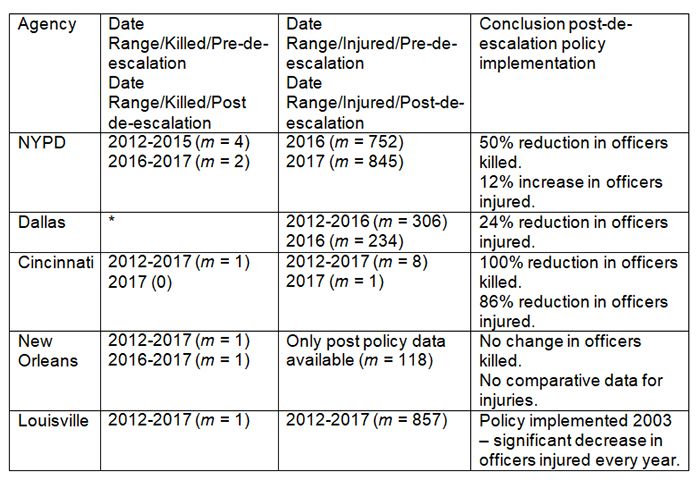 *The only officers killed in the line of duty at Dallas PD were the victim of an active shooter and are excluded as they cannot reasonably be attributed to de-escalation language in use of force policy.

Landers’ research indicates de-escalation has two common themes: slow the incident down and reduce or avoid force. While this may be a good start, de-escalation training can consist of mental illness recognition, communication techniques, active listening, tactics (time/distance), resilience, or a combination of all the above. One cannot research de-escalation without defining its parameters and objectives to ensure they are present in the evaluation.

2. A need to determine the outcomes we expect from de-escalation techniques to measure them.

Landers’ project indicates officer safety is an important measurable outcome and I agree. What about injuries to suspects or the necessity to arrest vs. mental health assistance? Do law enforcements agencies implementing de-escalation concepts know whether this meets objectives?

To that end, my own research attempting to answer this question resulted in finding a lack of empirical study on the effectiveness of de-escalation or associated platforms.

For instance, in their article “Mental Illness, Police Use of Force, and Citizen Injury,” Michael Rossler and William Terrill state empirical evidence of the benefit is limited regarding techniques such as verbal mediation to lower citizen resistance. Sema Taheri systematically reviewed the empirical evidence on crisis intervention training (Memphis Model) finding that, “CIT has no effect on outcomes of arrest, nor on officer use of force… these results raise some concern about the widespread implementation of CITs.”

Do other industries have evidence of the benefit of de-escalation practices and training?

The health care industry, especially psychiatric health, has been studying de-escalation techniques since the 1980s, seeing similar results to law enforcement. For instance, a study from the health care industry synthesized previous research on de-escalation training and determined there were a “lack of trials conducted under rigorous experimental conditions.” Another study on de-escalation training in psychiatric health care concluded the training had no effect. Lastly, a recent study stated, “While a number of theoretical models have been proposed, the lack of advances made in developing a robust evidence base for the efficacy of de-escalation is striking and must, at least in part, be credited to the lack of a clear conceptualization of the term.”

Knowing law enforcement as a former practitioner, I’m sure I’ve angered folks on both sides of the de-escalation topic – my former peers will certainly recognize the personality trait. However, this is intended to be an unbiased review of both sides of the debate. It’s time to put emotion, social rhetoric, politics and opinion aside to make way for evidence-based policing.

Landers and I both share a concern for some of the Police Executive Research Forum (PERF) recommended policy language and training being implemented across the nation. My primary concern is the absence of peer-reviewed research on its effects (officer and public safety). This is not to be taken that I think all the PERF concepts in the report are unwise for implementation. I have been and always will be a proponent of slowing down, creating distance, gathering information and deploying resources when the subject’s actions allow for it.  However, there is a dire need for realistic, generalizable, peer-reviewed research in law enforcement that speaks to policy, practice, training and tactics in this regard.

The way we’ve always done it has been criticized as faulty thinking but I opine change without solid evidence is also faulty thinking. I ask law enforcement to take a proactive position in collecting data and collaborating with academia to conduct research.

Law enforcement agencies hold the keys to the internal statistics that can be used to answer questions regarding many contemporary issues. Academia holds the keys to making sure the research is valid and generalizable for implementation. A partnership between the two ensures the appropriate contextual variables are present and field testing and evaluation of new ideas is conducted properly. Only through such a partnership can evidence-based policing practices come to fruition.

Be safe. Be vigilant.

David Blake is a retired California peace officer and a court-certified expert on human factors and the use of force. He has significant experience teaching use of force and human factors psychology to law enforcement officers in several states. David has graduate and undergraduate degrees in criminal justice and psychology. He has published both opinion and peer-reviewed research on the application of human factors psychology to first responders and their operational environments. David is currently a doctoral candidate conducting research on the application of human factors to officer-involved shootings. He is the proprietor of Blake Consulting and Training.

Effort to give officers bonuses for training stirs anger

'Do not do this': Kansas City PD official says police will be shown Minneapolis arrest video

4 ways to effectively communicate during a critical incident