How LEOs can deal with citizens legally CCW

It's common to encounter a citizen following concealed carry laws is significant. How can you tell when CCW starts to become suspicious?

As the ‘right to carry’ spreads across the United States, many law enforcement agencies and police officers express their unease — and for some, outright alarm — at the idea of citizens carrying concealed weapons.

Many law enforcement officers address concealed carry issues as part of their duties. Philosophically, many LEOs support the right to concealed carry for any civilian who can exercise the responsibility for proper care and awareness. It's common for citizens who do carry concealed to be very pro-law enforcement and willing to come to your aid if you were in the middle of a firefight. How to recognize when someone is carrying a concealed weapon, and what red flags should you look for?

Getting a citizen's help when you need it

Sir Robert Peel rightly said, "Police are the public and public are the police" ... particularly when you’re struggling with a suspect and need a citizen’s assistance.

Concealed carriers generally wear holsters. This is a key point. Most felons I have known or heard about won’t carry a firearm in a holster. Fanny packs are also common. These two things alone can be a big tip off that you are not dealing with a felon. Day planners, briefcases, backpacks are less common but available. Study the gear catalogs and remember the look of those products. Years of profiling have shown what may be included in the “tactical look”:

In addition to clear tactical gear, many concealed carriers might wear:

Watch for accessories — CCW’s carry the same gear as cops. An expensive folding knife in the pocket, a Surefire flashlight, and even magazine pouches are all indicators. 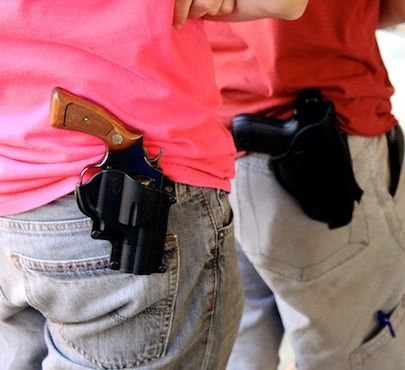 Jeans, pants with side pockets and shirts that can hang over a gun holster are possible indicators of a concealed carrying citizen. (Photo/Wikimedia Commons)

I don’t know of any CCW carriers that carry a gun in the hood of their sweatshirt like felons are known to do. I do know many that carry one in a jacket or coat pocket. Look for a sag on one side.

Other places to look:

Are they right or left-handed? Most carry the gun on the strong side of the body. What side of the body is the wristwatch on (if you can see it)? Most people generally wear the watch on the opposite hand. This will tip you off on where to look. Is there a cell phone that you can see? What side are they wearing it on? If not on the strong side, then maybe there is a reason for the off-side carry?

Important note: Don’t stop looking when you find one gun. Look for a second gun, as well as any number of knives, pepper spray, or other weapons.

Most concealed gun carriers have nothing to hide. They are generally not evasive in their speech or mannerisms. They may be nervous, but they are generally forthright in their dealings with law enforcement. If you ask them if they are carrying a handgun, they will most likely tell you. The law in many areas demands that they tell you upon contact.

Don’t expect them to share this information with you on contact, though. Some CCW civilians will be nervous enough to forget to tell you or just hope to get through the contact without you noticing. This may be true on car stops for traffic infractions — a technical foul, but not a deal-breaker for me personally.

Other notes about concealed carriers:

Being around cops will make many gun carriers nervous. They become self-conscious about carrying a handgun and will demonstrate that nervousness by their body language. You may key into this as being suspicious behavior. I would suggest evaluating further before you make an assumption. Off-duty cops have a bad habit of not really concealing the gun well. They don’t seem to mind that it will show or that people may notice and take alarm. After all, they are cops and not bad guys, right? Lawful concealed gun carriers also feel as if they are the “good guys.”

Remember, they don’t always think ahead or have rehearsal training in how to interact with law enforcement.

Behavior of a concealed gun carrier

Among the things that I look for when evaluating a potential gun carrier are various forms of evasive behaviors:

Obviously, there are many others, but these are some of the basics of CCW owners.

I’m not quite sure whether this is a subconscious affirmation of protection or self-conscious behavior. I just know they do it. Again, only the highly trained and disciplined ones don’t do it.

Rather than seeing CCW as a necessary evil, I would look upon it as an opportunity to work with your citizens. In talking with CCW carriers in my courses I have had numerous opportunities to get their point of view on this subject. By and large, they are very pro-law enforcement and will go out of their way to help you should the need arise. I treat them with respect and as a resource.

Law abiding citizens do not expect to be treated like a felon — nor should they be. They will be angry if you prone them out, spread eagle them against a wall or take their firearm from them without just cause.
I don’t expect all concealed carrying citizens to be experts on the laws in your state. Most will understand the gist of it but may get lost on certain points. 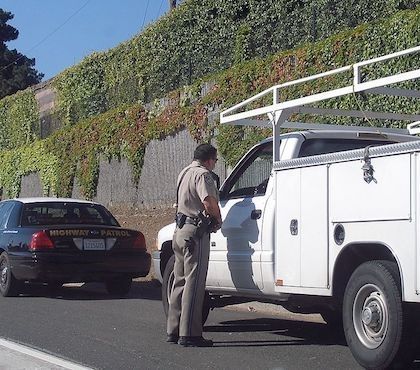 Traffic stops are times to take extra consideration when dealing with a concealed firearm. (Photo/Wikimedia Commons)

Consider having a pamphlet made up that explains concealed carry facts and laws in layman’s terms instead of dry legal prose. Have a question and answer section of the most commonly asked questions that you will get. When you meet a citizen with a CCW, give them a pamphlet.

Keep in mind that though they carry firearms, CCW permit holders don’t expect to be treated like felons when contacted for minor infractions or otherwise. A little care and consideration go a long way in avoiding unnecessary conflict.

"The Question" section brings together user-generated articles from the Police1 Facebook page based on questions we pose to our followers, as well as some of the best content we find on Quora, a question-and-answer website created, edited and organized by its community of users who are often experts in their field. The site aggregates questions and answers for a range of topics, including public safety.

The views and opinions expressed in the questions and answers posted directly from Quora do not necessarily reflect those of P1.