The 3 shooting stances: Which one's right for you?

No matter how good your other skills are, if your stance doesn't provide you with a stable shooting platform, you’re destined to be inconsistent

By Kenneth DeCicco
The TacticaList Contributor

Stance is a crucial element of shooting that can at times be overlooked. Perhaps the best way to emphasize the value of a solid stance, which provides the foundation of your shooting platform, is to look at other examples in different activities where a strong foundation is important.

Have you ever observed a new home being constructed? In the Northeast, where I'm from, the majority of homes have basements. When the builder is constructing the basement he goes to great lengths to ensure that the footings are strong and level.

No matter how well made the upper portions of the house are constructed, if the foundation is flawed, the rest of the house is destined for major problems.

When attempting to accurately shoot a handgun, no matter how good your sight alignment, breath control and other skills are, if your stance doesn't provide you with a stable shooting platform, you’re destined to be inconsistent with your shot placement. Consistency in all aspects of shooting is the key to accuracy. Download a copy of these stances as a poster to print and hang in your department.

When it comes to shooting stances, you have three choices:

In the past, the standard taught was the Isosceles Stance. The shooter faces the target squarely, the feet are set shoulder width (or slightly wider) apart. The toes face the target and are aligned. The knees are flexed at an angle that varies somewhat and the shooter leans forward from the waist towards the target. The shooter’s arms are extended and form an isosceles triangle, hence the name.

Pros: The positives include the fact that it feels like a comfortable and natural position to most shooters. In addition, the body positioning seems to have a positive effect on accuracy.

Cons: The predominant problem with the Isosceles Stance is that while it has side-to-side stability, it lacks front-to-rear balance due to the positioning of the feet.

The Weaver Stance has become very popular and replaced the Isosceles as the standard taught to most new shooters. The shooter blades his body, placing the foot on the firing side back and turning the support side towards the target. The shooter’s strong, or firing side, arm is extended and the support arm’s elbow is bent. This allows the shooter to employ a very stable push-pull grip. The shooter pushes with his firing arm and pulls with the support arm to stabilize the weapon.

Pros: The biggest plus is the push pull grip which is effective in controlling recoil and weapon control in general.

Cons: A major problem with the stance for the law enforcement community is that by blading the body, an officer is exposing an area of his torso that isn’t completely covered with body armor. A right-handed shooter exposes his left armpit, which is an entryway to the heart. In fact, many officers have been fatally shot in this area in spite of body armor.

Another problem with the Weaver is that movement while attempting to maintain the bladed position is awkward and problematic. Additionally, post shooting studies have shown that the majority of Weaver shooters reverted to a form of the Isosceles Stance during actual shootings.

The last stance has a variety of names. Some instructors refer to it as a modified Isosceles or Weaver. Others call it a fighting, boxer or tactical stance. For our purposes we will refer to it as the Fighting Stance.

The Fighting Stance was developed in the military in the special forces community. It made its way into law enforcement training and became popular because it allows officers to defend themselves with their hands, baton or firearm all from the same platform.

It’s also a great advanced technique for civilian shooters. In the Fighting Stance, the shooter is square to the target. His feet are shoulder width or slightly wider and the firing side foot is slightly behind the support side foot.

A good landmark is for the toe of the shooting foot to be at the instep of the support foot. This offsetting of the feet eliminates the forward-rear balance issue of the Isosceles Stance.

The knees are flexed to absorb recoil and to act as shock absorbers when moving in any direction. The shooter leans slightly forward and extends the arms straight out, bringing the sights to the eyes. The head is kept level to maintain balance, especially when moving.

Pros: Any weapon can be fired effectively from it this stance, although a case can be made for the traditional shotgun stance due to the recoil.

Cons: With the fighting stance, there really isn't a downside. By modifying the Weaver and Isosceles stances, it eliminates the common drawbacks of the other two stances. 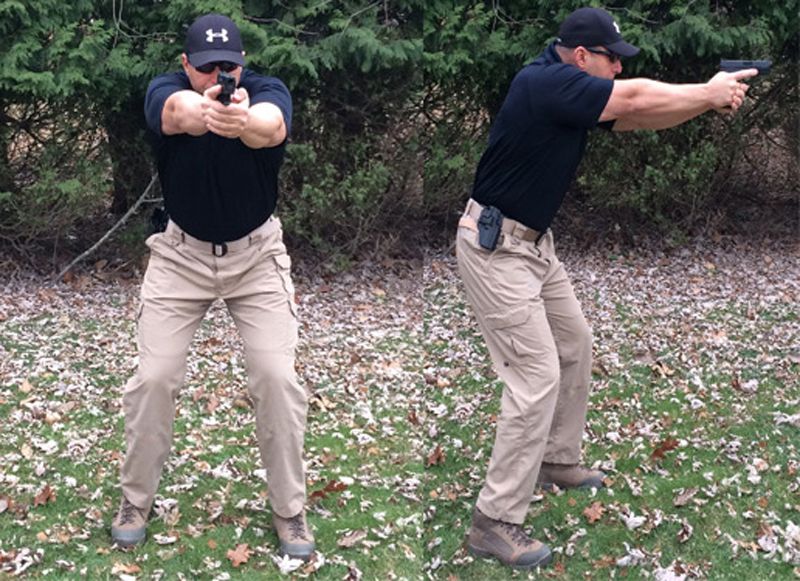 Try the different stances, see which one is most comfortable and fits your needs. Once you have made a choice, practice, practice, practice. You don’t need to be on the range or have a weapon in your hands to practice your stance. Muscle memory is real. Make your stance second nature and watch your shooting consistency improve.

This article originally appeared on FirearmsU.com

Kenneth DeCicco is a retired Detective Sergeant from the Somerville (NJ) Police Department. He's served as a Rifle, Subgun, Active Shooter and Reality Based Training instructor, as well as an agency supervising instructor, and is currently a shotgun and handgun instructor and Director of Training at the Tactical Training Center in Flemington, N.J.