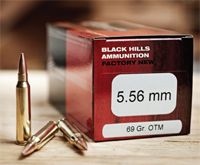 OTM (Open Tip Match) is the military designation for Match bullets such as the Sierra MatchKing design. The 69 grain Sierra is a bullet of long proven accuracy and is optimum weight and design for use in the 1/9” rifling twist rate found in the majority of the AR-15 rifles commercially available today.

This 5.56mm round provides a flat shooting, wind bucking 2875 fps from a 20” barrel, plus sub MOA accuracy. It’s loaded with a powder selected for extreme temperature stability and is flash suppressed for use in low light conditions.

About Black Hills Ammunition
We produce new ammunition for all four branches of the U.S. Military, including all current contracts for 5-56 match ammunition. We supply ammunition to most the U.S. firearms manufacturers and many custom gun makers. In addition, law enforcement agencies nationwide rely on our ammunition for duty and training. For more information visit www.black-hills.com.