4 reasons why police departments are struggling to fill their ranks

Calls for service continue to increase while recruitment numbers dwindle; police leaders must develop recruitment strategies that address these challenges

Editor's note: This special coverage series, Recruitment & Retention Crisis: The Struggle to Hire – and Keep – Good Cops, will take an in-depth look at the recruitment and retention challenges currently facing police agencies, share potential solutions to the crisis and highlight best practices progressive PDs are deploying to bolster their ranks. Watch for further installments of this series throughout the rest of 2017.

Across the nation, an alarming situation is developing: From New York to California, police agencies are struggling to hire and retain police officers. Departments are trying different approaches, but the numbers are still flagging. Preliminary results from the FBI’s 2016 Uniform Crime Report indicate violent crime is up 5.3 percent. With calls for service not abating, remaining police officers have to carry the load in those agencies unable to meet hiring goals. What is at the root of the problem?

This special coverage series takes an in-depth look at recruitment and retention challenges and potential solutions.

In order to understand why potential candidates might consider other professions, let’s look at how law enforcement compares with the rest of the working world.

While agency administrators recognize police hiring processes as one of the best human resources tools available to the department, the process is costly, tedious, lengthy and invasive compared to other fields. A 45-page application, physical agility test, extended background check and polygraph are exhaustive compared to hiring practices of other jobs offering comparable compensation. The law enforcement hiring process can take months, whereas in the civilian world, an application, interview, criminal history and drug test can be completed in just days.

In addition, many police applicants struggle to meet minimum police hiring standards. Credit history, physical fitness, prior drug use and other criminal activities limit the talent pool, causing some police departments to lower hiring standards – though this practice has historically provided mixed results and requires careful implementation. By comparison, other fields do not usually have such stringent requirements.

According to the Bureau of Labor Statistics, the average salary of a police officer in the United States is $62,760, but that does not account for geography. 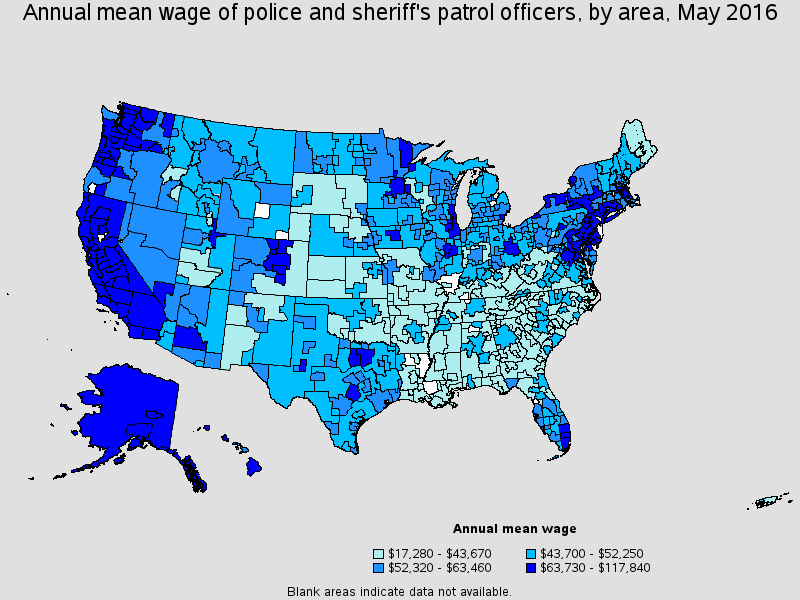 This Bureau of Labor Statistics map reveals annual mean wages for police – approximately a quarter of which fall between $17,280 and $43,670. By comparison, multiple studies average the income of a graduate with a bachelor’s degree at around $50,000 per year.

Requiring college degrees for police is an excellent practice with history grounded in research. In 1967, a taskforce commissioned by President Lyndon B. Johnson endorsed a four-year degree for police. The National Advisory Commission on Criminal Justice Standards and Goals and the Police Executive Research Forum echoed that endorsement. Multiple studies show educated officers generate fewer complaints and have less use of force issues. However, this may drive up the bar in addition to standard requirements when compared to civilian job opportunities.

Since events in Ferguson, there has been a growing distrust of law enforcement among some segments of society. When an officer is involved in a shooting, some community members assume the officer is in the wrong. These elements are often vocal and, unfortunately, there have been a few instances where their doubts and fears were borne out by the actions of some officers. This has a polarizing effect on potential applicants. Some may see the disorder and want to join the ranks to become part of the solution. Others prefer a path of less resistance. Either way, there can be little doubt that a law enforcement career is less likely to be obscure.

There is obviously risk associated with working in law enforcement. The National Law Enforcement Memorial Fund lists the current total of officers lost so far this year at 99.

The risks are not just physical. Peace officers can be taken to task by their agency, charged with crimes and prosecuted, and sued civilly. This is yet another consideration for those weighing out the balance of a law enforcement career.

With thousands of peace officers across the nation heading toward retirement, we must pass the baton on to the next generation. According to a study by the Law Enforcement Management and Administrative Statistics (LEMAS) survey in 2003 and the Census of State and Local Law Enforcement Agencies (CSLLEA) in 2008, the national attrition rate for officers is approximately 10.8 percent

Studies have shown millennials are often even more interested in self-advocacy than Generation X. Another part of this puzzle is the rapidity in which they seek return on their investment. Shortly after being hired they already want to be in SWAT or working as a detective, with little concept of the time it takes to prepare for those positions. Then after attaining these roles, they are ready to move on to the next goal. This presents enormous challenges for a field with firmly established beliefs about working your way up a progressive career ladder.

Whether the difficulties of hiring processes, pay, risks or generational issues confront agencies across America, one thing is clear – law enforcement must adapt and evolve.

Police leaders need to navigate new territory with both an eye toward the future and one to the past – stubbornly holding to values and hard-learned lessons, while simultaneously keeping open minds about how to proceed.

Administrators must be mindful of these challenges and develop their recruiting strategies accordingly. This may require increased funding for recruitment and citing these challenges as justification for that funding. In addition, reasonable adaptation to the current client pool will help to hire and retain millennials. Shoring up retention numbers is also a good way to hold numbers on the back end, particularly for your most seasoned officers. If we are to maintain a society of laws, we must fill the gaps in the thin blue line with qualified people, whatever the challenges we face finding candidates.

Sean Curtis is a law enforcement professional with over two decades of experience, serving with SWAT, diving and swift water rescue teams in Colorado. He has also served in wildland fire, search and rescue, EMS and emergency management.

7 questions to ask before hiring a police recruitment consultant

How to build a diverse police force: Lessons from the corporate world