The only flashlight technique you'll ever need

There has been so much written about the proper way to use a flashlight when firing a handgun that you probably rolled your eyes at the thought of reading another article on flashlight techniques. But humor me - this might just be the last flashlight technique you’ll ever need. Bold statement, I know, but if you have an open mind and are willing to try something new, you might be surprised at the results.

Let me guess how your last low-light training went. You were shown several different flashlight shooting techniques – the range instructor may have even told you which one is his favorite – and then you were allowed to practice with the various techniques until you found the one “you liked the best.” Sound familiar?

At the sound of the whistle, you’ll draw your handgun and get into whatever flashlight technique you prefer and fire two rounds. I bet that one sounds familiar too?

Instead, how about at the sound of the whistle, you’ll shoot the target? Seems a lot simpler and quicker, doesn’t it? 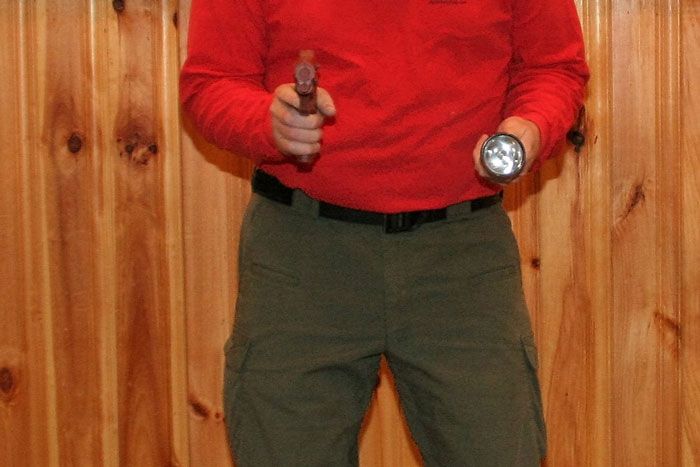 By indexing your elbows into your side wherever you turn or pivot to, your firearm and flashlight will always be facing forward. (Photo/Mike Rayburn)

Simpler, easier and quicker is what firearms training should be all about. It shouldn’t be about which flashlight holding technique you need to get into before you’re able to return fire at someone, who, if you read the FBI statistics on officer-involved shootings, may already be shooting at you.

The premise of these various flashlight techniques is that the flashlight is married with the gun, so the gun and light are together and move together. It sounds good in theory, but in reality it’s a detriment to an actual shooting. One of two things is going to happen. One, you won’t use the light at all. Or two, you’ll waste valuable time in a shooting trying to get target acquisition with the light first, before you fire.

I’ve witnessed this phenomenon firsthand during low-light training. When given the command to fire, the flashlights come on with beams of lights all over the range, sometimes 30 feet up in the trees behind the back berm. Some will take the time to align their light beam on the target before shooting, while others will shoot with the available light that’s present from all the other flashlights around them, and therein lies the key to flashlight techniques. 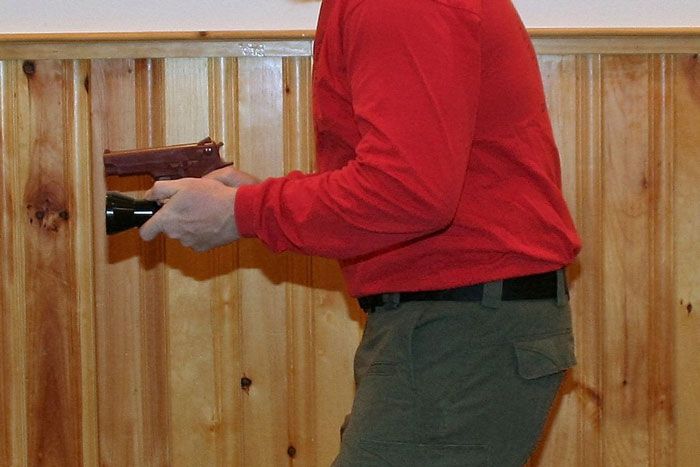 You can easily shoot from the index position, or move the gun up to eye level if you require a sight picture. (Photo/Mike Rayburn)

Stop trying to use the flashlight like it’s a gun. In other words, stop trying to get the light beam to shine directly on the target/subject – as most of these techniques require – like you’re going to shoot him with the flashlight. You only need enough light to get two things: target identification and target acquisition. You need to identify the subject as a threat and acquire/see a target, so you can shoot it.

If the bad guy is already shooting at you, then identifying him as a threat is pretty easy. You may even be able to get target acquisition by shooting at his muzzle flash. But that’s a shooting technique and not a searching technique.

There are going to be times where you’ll need target identification and target acquisition, and not shoot. For those times, you need a searching technique that doubles as a shooting technique. Some of you will argue that you already have that with the various techniques already in service. If that’s the case, then why aren’t they being used in actual shootings? You need a technique that is simple to use, but effective at the same time. 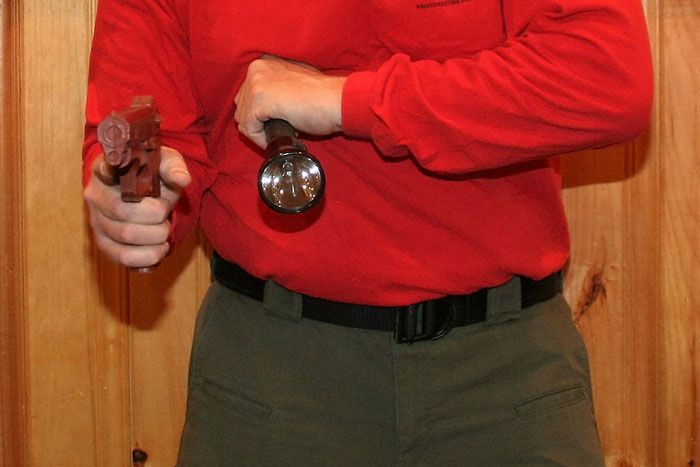 You only need enough light to get target acquisition and target identification. That usually doesn’t require the center of your beam to be directly on the suspect. (Photo/Mike Rayburn)

That technique is called indexing. There are two ways to do this. One is to index your elbow into your side. This works best for those of you that have an old style flashlight with the on/off switch on the side – still my preferred type of light. Index your elbow into your side, with the light pointing forward. Keeping your elbow indexed into your side allows the flashlight to always be pointing forward. The center beam, as we so often try to do, doesn’t have to be directly on the target. You just need enough light to get target identification and target acquisition.

The second way to index your flashlight is for those of you that have the on/off switch on the back of the light. Index your elbow into your side, as we did previously, and bring your arm across the front of your torso. You’ll have two points of index with this technique. Your elbow is into your side and your forearm is indexed across your torso. 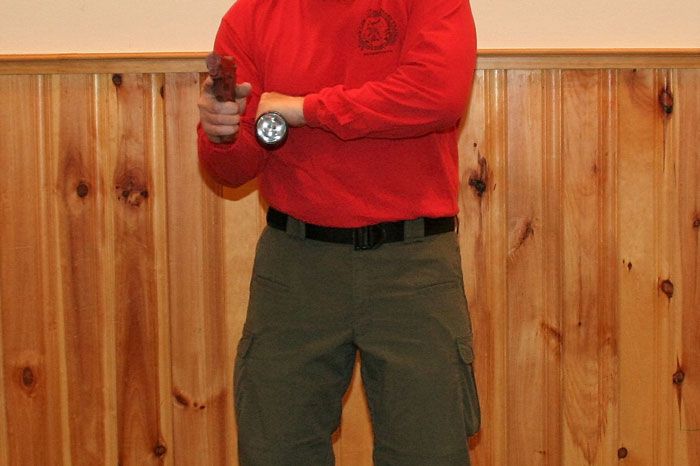 If your flashlight has the on/off button on the back, simply bring your arm across your chest, indexing it into your strong side. (Photo/Mike Rayburn)

By indexing the flashlight to your body, the flashlight and your body work as one unit. Wherever you pivot to, the light will always be pointing forward. If you need to look over or under something, you can easily move the flashlight around. It’s not one of those things where you have to always keep the light indexed. Be flexible, that’s what this job is all about. 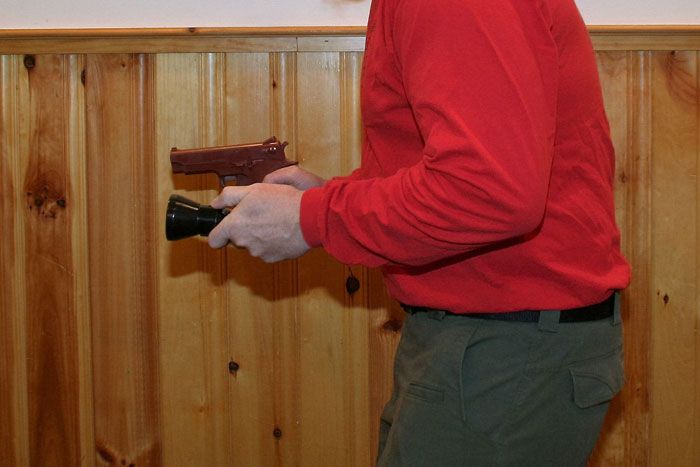 There’s an added benefit to both of these techniques. We all know it’s been said the bad guys will shoot at the light beam. By having the flashlight indexed into your side, or across your torso, the light is low and off to the side. But, if you marry the flashlight with the gun in one of those other techniques, the beam of light is emanating from your center mass area. 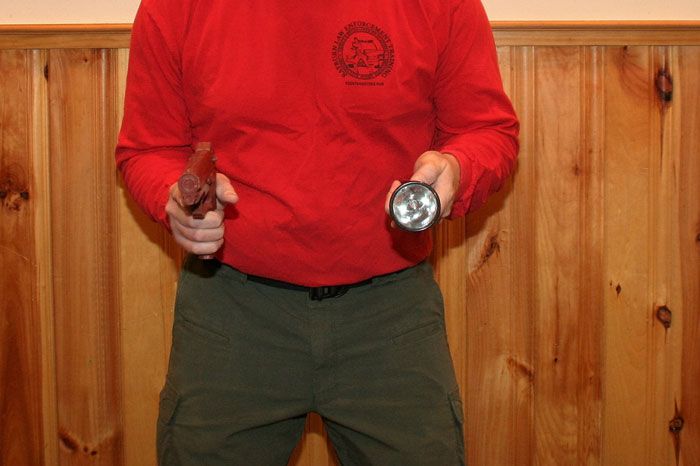 Your light and gun move together as one unit, but your ability to shoot is not dependent on your light in some type of awkward holding technique. (Photo/Mike Rayburn)

You run the risk of not only being shot in your center mass area, but if your gun is at eye level you could suffer a head wound if the bad guy shoots at your light. There’s also the possibility of your gun being disabled inadvertently from an incoming round from the bad guy, or, if you’re shot in your hands you may not be able to return fire. It makes more sense to keep the light low and off to one side of your body, while still having sufficient light for target identification and target acquisition.

Remember what I said about having an open mind and willing to try something new? Try this technique with a safe and empty handgun first by searching around your home or some other safe area. Then go to the range and practice shooting with it. You’ll find your searches will be easier to do, which translates into safer searches. You’ll also find you can easily shoot with this technique, without having to manipulate your flashlight and gun together into some technique that we almost never use anyway.

Michael T. Rayburn has been involved in law enforcement since 1977, and is the author of five books. He is a former adjunct instructor for the Smith & Wesson Academy and is the owner of Rayburn Law Enforcement Training. He can be reached at CombatGunFighting.com.